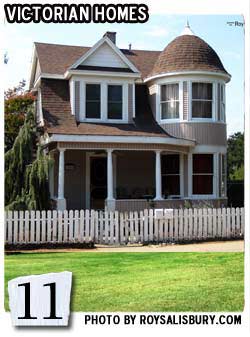 Rocklin, Calif.- These three homes are near the Wickman – Johnson white farmhouse at the corner of Rocklin Road and Fifth Street. They stand out in the neighborhood by their Victorian design. All are private residences.

Matt and Molly Moore built the Queen Anne style house on the SE corner during 1905, the year of their marriage.  Matt was the Southern Pacific RR Station Agent, Molly was a schoolteacher and the pianist at St. Mary’s of the Assumption Catholic Church, now Old Saint Mary’s Chapel, on Front Street.

The house on the northwest corner was constructed in 1895. It was occupied by the family of former Argonaut and Tennessee farmer Butler Scribner and his wife Lillian. Scribner owned a general merchandise store in a small frame building just south of the granite Barudoni building on Front Street. He moved his business to Roseville after Rocklin’s roundhouse closed in 1908, but his Roseville business failed in 1916. He finished his career as an insurance agent.

The Scribners had 2 sons, one of whom owned and operated Scribner Appliance Store on Pacific Street for about 40 years during the mid twentieth century.

The Scribners bred and trained horses for racing at Rocklin’s Race track located on the site of today’s Racetrack subdivision near the Rocklin Grade School. A Scribner harness horse named Lady S was a frequent winner and the pride of the Scribner stable.