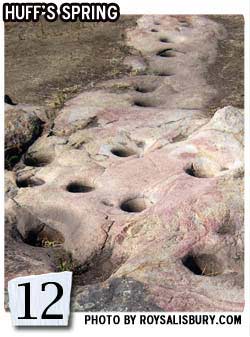 Rocklin, Calif.- This spring is at the north end of Johnson Springview Park 200 yards east of the Springview Middle School soccer field.

You can gain access from Fifth Street via the footpath at the north side of the Wickman – Johnson home, the white farmhouse at the corner of Rocklin road and Fifth.

The spring was a widely known Rocklin curiosity and source of clean drinking water in the late 19th and early 20th centuries.It’s called Huff’s Mineral Spring, named after William Huff who lined it with granite blocks in 1887 and sold the water – 25 cents for all a person could carry.

The water is alkaline, not suitable for irrigation, but it is cool and clean and early Rocklin settlers relied on it to augment the stream and lake water that the railroad companies brought down from Blue Canyon in tank cars.

The spring gurgles about 120 gallons per minute of chilly water over its granite lining into a tributary of Antelope Creek. Mysteriously, the flow slows noticeably at midday but is strong again by early evening.

A nearby cluster of 88 bedrock mortars tell that the area was formerly home to a community of native Nisenan.

The Nisenan built their villages on low rises along Rocklin’s streams, hunted game in Rocklin’s hills and meadows and gathered fruits, nuts, seeds, roots, and especially acorns here, for 1,500  or more years before European explorers made contact with them in the early 1800’s. Rocklin’s creeks ran dry in the summers before European settlers dammed the Sierra watershed.

The spring was possibly the best source of the water that the Nisenan needed during the fall acorn harvest to wash tannin from their acorn mush.


Roseville Today is locally owned & community supported.
We have NO affiliation with print, politics or corporate media.
(Now in our 20th Year)