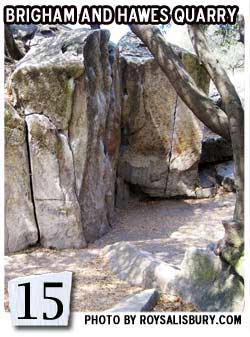 It was probably the first of more than sixty quarries to eventually open in Rocklin. All are dormant now.

The first documented evidence of any Rocklin quarry is a Sacramento Union article of March 21, 1864, written as the tracks of the transcontinental railroad had been laid along the 22 miles to our area from Sacramento.The article announced that state legislators and their families and friends had traveled by rail to visit the new quarries at the end of the tracks.  The reference was probably to this quarry since it is the only large quarry bordering Rocklin’s rail corridor.

Also, this quarry is known to Rocklin’s old timers as one of Rocklin’s oldest since quarrying operations here predate their memories.

This quarry probably provided waste granite for rail beds and granite blocks for the culverts that carried stream water under the tracks. Teams of oxen carried the granite to spots ahead of the rails as the rails ascended toward Auburn.

This quarry is privately owned. It is deep, but it is filled nearly to the rim with trash, including a few junk cars and the refuse of lumber processors that bordered on the north and south rims in the mid twentieth century.

Rock climbers practice on the granite boulders at the south rim.