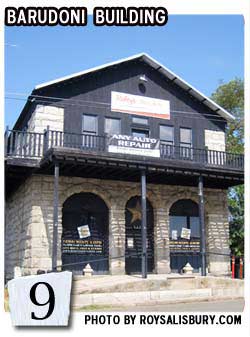 Rocklin, Calif.- The Barudoni Building is at 5250 Front Street, across from the Old Saint Mary’s Chapel. Meat broker Joseph Barudoni built it in 1905 as a meat market, with an office for Doctor Woodbridge on the second floor. The building’s walls are blocks of Rocklin granite.

Front Street was a bustling commercial district in 1905.

Joseph Barudoni died six months after the fire and his family eventually sold the building.

In 1954 a successor owner extracted granite blocks from the upper walls to construct a gas station in Ophir. The station is demolished now, but the granite blocks are strewn about the Ophir landscape nearby. Subsequent Barudoni owners filled the gaps with wooden framing.

Notice the remnants of the cantilevered granite steps on the exterior of the north wall. They led to Doctor Woodbridge’s office.

In the mid twentieth century the Barudoni building was a feed store, and later an antique shop and a recording studio. Two residential apartments are on the second floor.

The main floor of the building is now vacant and Rocklin Historical Society is looking for ideas to propose to the owner for its use.