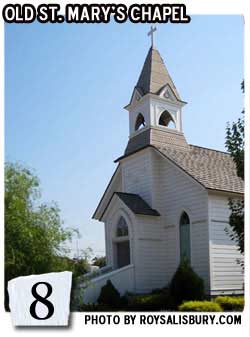 The Old Saint Mary’s Chapel is at 5251 Front Street. It is the centerpiece of Heritage Park which is a joint project of the City of Rocklin and the Rocklin Historical Society to beautify Rocklin’s railroad corridor.

The Chapel was originally on an oak framed lot about a quarter mile south at 5420 Front Street, dedicated there in 1883 by Gold Rush Era Bishop Joseph Alemany as Saint Mary’s of the Assumption Catholic Church. The Catholics vacated Saint Mary’s in 1983 in favor of their current larger facilities, the Saints Peter and Paul Catholic Church on Granite Drive.

The Church of Religious Science, and later a Baptist congregation, used the church for services until the mid 1990s.

A successor owner donated Saint Mary’s to the society in 2005 and the society moved it to the park for restoration.

The society opened Saint Mary’s in 2007, primarily for use as non-denominational wedding chapel.

Woodpeckers and foul weather toppled Saint Mary’s steeple in 1937 and thieves ran off with the steeple bell.

The restoration includes a replica of the 1937 steeple but today’s bell is on loan from Rocklin’s Community Covenant Church. Each bride pulls the rope to toll the bell as she leaves the chapel after her wedding ceremony. 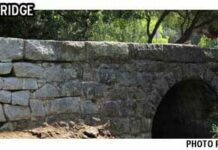