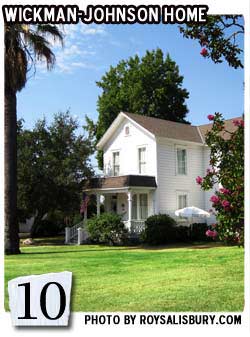 Rocklin, Calif. – This white farmhouse is at 5200 5th Street at the west end of Rocklin Road.

Anders Wickman acquired it in 1919 from the estate of William Huff who had built it in 1886. Wickman was a nineteenth century Finnish immigrant, a city councilman who had previously worked in the granite business, notably operating quarries near his former home on Ruhkala Road.

Wickman’s grandson Gene Johnson restored the building in 1999 and occupies it today with his wife Margaret.

The Wickman and Johnson families operated a farm and dairy on the surrounding property including the property now covered by Johnson Springview Park to the south and Springview Middle School to the north.

The property west of the farmhouse was the seasonal home of Nisenan Indians until the mid nineteenth century. The Nisenan crushed acorns into mush and washed out the tannin in the waters from Huff’s Spring located near the middle school’s athletic field.

Farming operations during the twentieth century unearthed artifacts of Nisenan life ways, some of which are on display at the Rocklin History Museum.