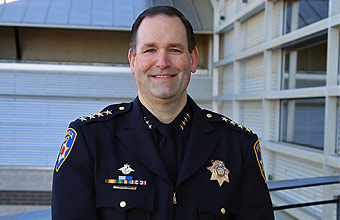 The City conducted extensive community outreach to inform the selection process, from interviews with community leaders to a citywide survey of residents about neighborhood safety and public safety priorities.

Three panels comprising community leaders, public-safety staff, and department heads spent a full day evaluating a competitive field of candidates from throughout the state and providing feedback to the city manager.

“We were extremely impressed with the expertise and credentials of the candidates we interviewed,” Casey said. “Through this highly competitive process, we gained consensus from the panels that Troy Bergstrom brought unique strengths and perspectives that are extremely valuable as he serves in this key role in our community.”

Bergstrom has served as the Acting Policer Chief since November of 2020 when then Chief James Maccoun retired from the Roseville Police Department. As Chief, Bergstrom will lead the Department’s 210 employees and manage the $46 million annual operating budget.

Initially hired by the City of Roseville as a police officer in 2000, Bergstrom was promoted through the ranks and gained the unique distinction of having supervised every division within the Police Department.

Bergstrom was the architect of the Crime Suppression Unit, which initially focused on Roseville’s more criminally active neighborhoods. Since the team’s 2005 inception, the CSU has been an integral part of the low crime rates our community enjoys.

He holds master’s and bachelor’s degrees in Criminal Justice from California State University, Sacramento and is a graduate of the FBI National Academy, recognized as the premier executive law enforcement training academy in the world.

For the past 13 years, Bergstrom and his wife have raised their two sons in Roseville where they attended Roseville schools and graduated from Oakmont High School.