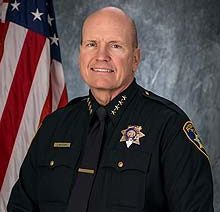 Chief Maccoun has served as Roseville Police Chief since August 2017 after serving as Assistant Police Chief in Roseville for three years. Prior to Roseville Maccoun spent 32 years with the Sacramento Police Department but actually began his career in law enforcement with the City of Roseville being hired as a police services aid in 1980.

“I’ve worked very closely with Chief Maccoun the entire time he’s been with the Roseville PD, and know firsthand that he leaves big shoes to fill,” said Roseville City Manager Dominick Casey. “I’m grateful for his leadership, his focus on transparency and open communication, and the way he cares for the community in which he was raised.”

During his tenure at the more than 200-member Roseville Police Department, Chief Maccoun emphasized continuous improvement, fostering an environment of greater participation and problem-solving throughout the ranks. As a life-long learner himself, he encouraged leadership development throughout the organization.