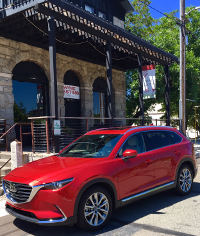 Roseville, Calif. – A year ago, in a modest revamping of the CX-9, Mazda decided to abandon its V6 engine, a move that left some wondering if this sport utility vehicle would remain a suitable family hauler.

Apparently, the Mazda team knew what it was doing. After one week of driving the 2017 Mazda CX-9, we became pretty big fans. The turbocharged four-cylinder engine not only delivers enough performance, it also has significantly increased the fuel efficiency in comparison to the old V6 model.

Mazda’s most expensive and largest SUV remains a midsize crossover that has three-rows and can transport seven people (many rivals carry eight). It also retains its reputation for being the sportiest and fun to drive model in its class, which includes heavy hitters like the Honda Pilot, Ford Explorer and Toyota Highlander.

Introduced in 2007 along with the CX-7 (discontinued in 2012), the CX-9 has gained appeal over the years because it’s always been considered refined, stylish – and from this vantage point – never as luminous in appearance as some other SUVs in its class.

The latest version of the flagship CX-9 is lighter and has sharper styling that includes a sleek roofline and angular front grille. The interior is much improved with higher end materials, and the vehicle comes equipped with more safety features.

Mazda has earned a reputation for producing vehicles that are a pleasure to drive. It’s typically a stretch to assume a midsize SUV will have a fun factor, but the CX-9 has good performance and the ride quality is smooth and makes the driving easy. It has a refined feel and there’s very little noise. It was nimble and handled terrific on a weekend trip to Lake Tahoe, where some of the roads are extremely curvy and challenging to climb.

Previous CX-9 models were lacking of any interior sophistication. However, that was addressed in a very successful redesign. It’s nice to see that Mazda’s Connect infotainment system has a display that matches the eye of the driver and is also intuitive to operate.

We’re still no fan of the third-row seating, which is suited best for kids and smaller adults. But if forced to reside in the CX-9’s third row, it’s better than some competitors. Adults won’t feel too uncomfortable for short-term trips, yet any sizable journey probably won’t cut it.

On the comfort side, the seating is spacious and relaxing for both front and second row occupants. Note that the second row is a bench and there’s no optional captain’s chairs. But the standard three-zone automatic climate control is a nice touch that second-row passengers can monitor. The storage area behind the third row remains a bit small at 14.4 cubic feet. With the rear seats folded, the space grows to 71.2 cubic feet.

Mazda continues to offer an SUV that delivers a pleasing athletic ride, making the 2017 Mazda CX-9 the best in class in that category. The downside is the CX-9 can’t haul eight people like most of the competition and the base price is a little steeper than expected.