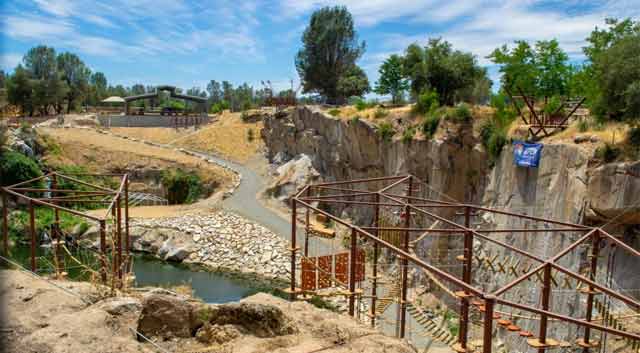 Rocklin, CA,- The transformation of a 160-year-old granite quarry into an adventure attraction for all ages is nearing completion as further details regarding services and attractions at Quarry Park Adventures were decided at a special city council meeting held on July 10.

Construction of permanent bathroom facilities will now move forward onsite, along with installation of utilities, and a concrete and asphalt slab under the guest services building. City Council also authorized installation of a food service building, for money to be spent for other miscellaneous expenses to complete the food service and restroom items, and for construction of an observation deck to be bid out.

The addition of a king swing attraction was also discussed at the meeting, but it was decided to not move forward with construction as this time. Funds were allocated for the swing to possibly be built in the future, but the project priorities are the permanent onsite-built bathrooms, a food service structure, and an observation deck.

Quarry Park Adventures is projected to attract more than 130,000 visitors a year to historic downtown Rocklin, who will spend their dollars not only at the park but at surrounding establishments. The activity will help businesses thrive and bring additional sales tax dollars to the city to support vital public services that maintain Rocklin’s high quality of life.

The City also has a revenue sharing agreement with the contracted park operators in place, which will repay some of the costs of construction. The project has already led to private investment the Quarry District with land that has sat dormant for decades now primed for private commercial and residential development.