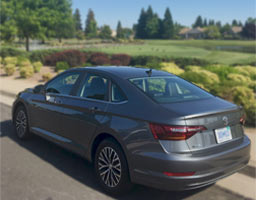 Roseville, CA- Let’s face it, this is not the most exciting car in the Volkswagen lineup. It’s tough to exhibit a lot of enthusiasm for the Jetta, a solid yet very unspectacular compact sedan.

It’s also worth noting that sales have dropped nearly in half since that high-water mark in 2011. A year ago, Jetta sales were 90,805, its lowest total in 20 years. So, perhaps it’s no surprise that the 2019 Volkswagen Jetta is sporting a full redesign.

Don’t expect to see a new-look Jetta heading down the road. The 2019 Jetta is virtually the same from an exterior standpoint. The conservatively-built Jetta is a marginally wider, taller and longer, and sports a little different front grille than the outgoing model. Yet physically it remains a non-attention getter, while three of its primary competitors – Honda Civic, Kia Forte, Mazda 3 – all have more appealing exteriors.

We aren’t totally bagging on the Jetta. Sure, it remains rather dull from an exterior standpoint, but it still has some serious credentials. The Jetta has historically been comfortable, roomy, well-constructed, and offered at a modest sticker price – the 2019 version starts at just under $19,000.

From a performance perspective, the Jetta can hold its own against much of the competition. Its lone engine is a turbocharged 1.4-liter, inline-four that generates 147 horsepower and 184 pound-feet of torque. It’s accompanied by either a six-speed manual or an eight-speed automatic transmission.

While not particularly quick from a starting point (0-60 mph in 8.4 seconds), the Jetta delivers good mid-range punch and does just fine when passing power is needed on the freeway. For drivers looking for something much quicker, the Jetta GLI features a turbo-4 with 228 horsepower.

This year’s standard Jetta delivers a little better fuel economy at 30-40 mpg, up from last year’s 28-40 mpg range. With a gas tank capacity of 13.2 gallons, the Jetta will travel a long way – approximately 450 miles before a refill is required.

The Jetta delivers the kind of ride one expects from a solid compact sedan. It takes curves and corners fairly well and supplies good stability. But don’t expect a fun factor from the Jetta because its road manners aren’t very engaging.

There’s much more to like from an interior perspective. For a compact car, the Jetta has some fine characteristics. It offers good overall seating comfort and doesn’t feel cramped in the back, unless there’s three people. That’s something that virtually all compacts suffer from – twos company and threes a crowd. Leg and head room are good in either front or back seating.

There’s a standard 6.5-inch infotainment screen that is modestly on the techie side and includes Apple CarPlay and Android Auto connectivity. Buttons are big, so they are easy to distinguish and the controls are generally intuitive.

The Jetta offers lots of storage space in all four door pockets and the center console. The cargo area is about average for the class at 14.1 cubic feet, a suitable size for handling many daily chores. What we didn’t like about the trunk was if not careful, the trunk lid can come down on your head if not entirely secured to the top. No fun if that happens! We are also not enamored with the considerable hard plastic usage.

So, we’ve pointed out that the 2019 Volkswagen Jetta is not too exciting. Yet it remains a good choice in the compact class thanks to its solid performance, handling and interior makeup. Sticker price and resale value remain two of the Jetta’s positive traits.