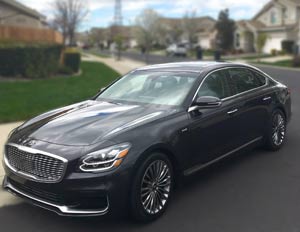 Roseville, CA- Are you looking for a luxury sedan that won’t break the bank? Kia believes it has just the car for you.

Despite the appealing price, there’s reasons to be extremely wary of pulling the trigger on the K900. Sales have been miserable since it debuted in 2015. Its best sales year in the U.S. was 2,524 sold in 2015, while last year was its worst – 354. By comparison, Mercedes E-Classes had sales of 49,473 last year.

Even with a major redesign for 2019, sales continued to be almost nonexistent (62) for the first two months of 2019. One has to either credit Kia with not giving up on the K900 or wonder why it didn’t just quietly stop production this year. Also clouding the picture is Kia’s luxury division – Genesis – produces three luxury sedans in the G70, G80 and G90.

Another factor in the lackluster K900 sales is a Kia luxury sedan doesn’t possess the glamour of Mercedes Benz, BMW, Lexus, Acura and a few others. But one would think for $60 grand that the K900 is at least deserving of a look, resulting in more sales.

There’s no questioning whether the redesign has improved the original K900, Kia’s largest sedan. The 2019 model has a better engine (twin-turbocharged V6), enhanced chassis and interior upgrades, making the sedan more worthy of a luxury name tag.

We found the new engine a big improvement over the previous K900s that had an unimpressive V6 for its standard models and several optional V8 engines. The new engine was lifted from the Kia Stinger GT, an all-wheel drive, twin-turbo 3.3-liter, V6 that generates 365 horsepower and 376 pound-feet of torque.

Kia appears to have placed more of a focus on comfort than sportiness. There are other luxury sedans that offer a better overall ride, yet the redesign did result in some improvements in handling, steering and ride quality. K900 is pleasing straight ahead and handles winding roads fairly well. There’s plenty to choose from with the driver modes (Comfort, Sport, Eco, Smart and Custom).

Overall, the interior makeup is better. Most drivers will enjoy the standard 20-way-adjustable seat, the 12.3-inch infotainment screen, heated seats, Apple CarPlay, Android Auto compatibility, and 17-speaker sound system. One cool thing we love is when using the turn signals the views from the K90’s side mirror camera appears in the instrument cluster, which should eliminate any “blind spot” concerns.

One criticism that frequently gets addressed is the use of hard plastic in some areas. Yet they aren’t located in places that jeopardize comfort.

There’s an abundance of space up front, so leg, head room and comfort are no problem. The back seat also has heated seats and delivers comfort and space for three passengers. The cargo area is sizable at 15.3 cubic feet.

Thanks to a solid redesign that’s made the sedan more appealing, the 2019 Kia K900 has a chance of surviving, assuming sales pick up. If not, don’t look for this luxury sedan to be around much longer.