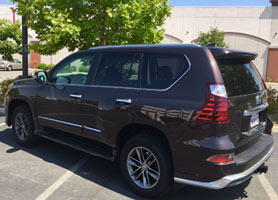 Lexus 2018 Screaming for a Remodel

Roseville, CA- Four years has been long enough. The Lexus GX 460 is due for an overhaul.

Although Toyota and its luxury brand (Lexus) continue to offer a large variety of quality sport utility vehicles, that doesn’t mean the Japanese automaker can rest on its considerable laurels. The last meaningful update to the GX 460 came in 2014. Although many vehicles go through a more extended time with few changes, this large, luxury SUV is currently dated.

Technology is one of the primary areas where the 2018 Lexus GX 460 needs attention. Rivals in the luxury SUV class are more sophisticated and cutting edge. Interior space, poor fuel economy and driving manners area among the issues with the GX 460, which has two trim levels (base, luxury).

The SUV offerings by Toyota have always been a favorite here. Whether shopping for a compact SUV or a super-sized model, there is something in the Toyota lineup for everyone. The Toyota SUV list includes the RAV4, 4Runner, Highlander, Land Cruiser, and Sequoia. And if one desires a more upscale SUV, Lexus offers a variety of SUV options as well.

The four-wheel drive Lexus GX 460 debuted in 2010 and remains a truck-based chassis with rugged characteristics that allow it to operate well in off-road situations. The GX 460 comes standard with hill-descent control, low-range in the transfer case, and 8.1 inches of ground clearance. Note that the adaptive and auto-leveling suspension come only with the luxury model.

The GX 460 has one engine choice, a robust 4.6-liter, V8 that’s paired with a six-speed automatic transmission and generates 301 horsepower and 329 pound-feet of torque. We found the luxury SUV lumbered a bit in certain driving situations, no doubt partly due to its heavy curb weight (5,200 pounds). The GX goes 0-60 mph a respectable 7.5 seconds, but gets only 15-18 mpg. The towing capacity is 6,500 pounds

In spite of its size, the GX 460 still provides some fine driving characteristics. It’s refined, nimble for a large SUV, and delivers a smooth ride with solid handling. There’s very little road or engine noise.

The interior technology and overall configuration are lacking in the GX 460, while its primary rivals are far more sophisticated. The 8.0-inch touchscreen has outdated graphics and the functionality is modest. Neither Apple CarPlay or Android Auto are offered. One good thing about the lack of technology – its fairly easy to master the entertainment and navigation interface.

Leg and head room are good for driver and all occupants of the first two rows. But the third row is tight and only suitable for young kids. There’s also issues with the tailgate, an old-school one that swings out instead of folding down.

Even though sales were brisk a year ago, the Lexus GX 460 still is screaming for a remodel.

Eventually its lack of refinement will catch up to this luxury SUV.