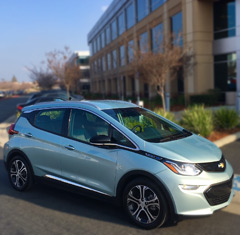 Roseville, CA- The Chevy Bolt is a practical electric vehicle (EV) that’s designed for the masses.

First and foremost, the four-door hatchback has an impressive range of 238 miles. It provides sufficient power and handling, two high-priority traits among American car buyers. And other than the superior Tesla Model 3, no other EV car in the Bolt’s price range (around $37,000) offers 200-plus miles before a charge is required.

Speaking of price, the Bolt will cost more moving forward. General Motors sold its 200,000th plug-in vehicle during the fourth quarter of 2018, igniting a gradual 15-month phasing out of the $7,500 federal tax credit that Bolt buyers were using. The tax credit reduces to $3,750 on April 1, 2019, falls to $18,750 by Oct. 1, then goes away for good six months later. Tesla is the only other car manufacturer to have reached the 200,000 sales mark. Note that the California rebate remains $2,500 for all EVs.

Even though last year’s sales were a significant drop off from 2017, the Chevy Bolt remains one of the stars in the all-electric vehicle category.

One of the first things people marvel at regarding the 2018 Chevy Bolt is the 60 kilowatt-hours (kWh) battery – it’s enormous. Actually, the battery never really catches one’s eye because it’s smartly located under the floor and out of sight.

Battery charging is always a concern for any EV owner. The Bolt takes approximately 9.5 hours for a full charge, using a standard 240-volt outlet at home. A Level 3 charging station can add roughly 90 miles of range every 30 minutes.

Two things we’re not enamored with are the Bolt’s rather dorky appearance and its name. The hatchback looks a little odd, thanks to its tall appearance and smallish front end. But the name is more baffling. Why did the folks at Chevy decide to call it the Bolt when it already had the Chevy Volt, a plug-in hybrid? The chance of someone confusing the Bolt with the Volt is likely, so why go there?

The Chevy Bolt has two trim models – LT and Premier. Although mechanically the same, the Premiere model comes with additional standard features like leather-trimmed seats, roof rails and some other notable upgrades.

Although its appearance will make most people think it’s gutless, the Bolt delivers surprising power in all driving situations. It generates 200 horsepower and 266-pound-feet of torque, allowing it to accelerate from 0-60 mph in an impressive 6.8 seconds. And the 3,563-pound Bolt still possesses ample power with four people onboard and gets the equivalent of 110-128 mpge.

We’re impressed with the performance and also how it drives. The underfloor battery pack gives the Bolt a low center of gravity that makes the vehicle feel nimble on even challenging, curvy roads. The regenerative braking system recharges the battery when one lifts their foot off the accelerator. Additional braking is available by squeezing the left-hand steering paddle.

One downside to the Bolt is the interior. The front seats are thin and too hard, not a good combination for any long-distance driving, especially for larger people. The front seats also don’t have any lumbar adjustment and power-adjustable seats are not available even in the Premiere model. Other issues include hard plastic materials and a thin carpet.

Unlike the extremely techy Model 3, the Bolt is fairly simplistic with simple-to-understand controls and a 10-inch touchscreen. Yet the truth is, many car buyers prefer the simplicity. Apple CarPlay and Android Auto are standard, but built-in navigation isn’t available in the Bolt, so drivers must rely on their smartphone for directions.

The Bolt offers good head and leg room for front seat occupants. Three people is a definite squeeze in the back seat, where head room is amble but the legs can feel a bit cramped. The cargo area is good, providing 16.9 cubic-feet of space that expands to 56.6 when the rear seats are folded down

Still a standout among its peers, there’s plenty to like about the Chevy Bolt. The upside is large, thanks to the enormous mileage range and the surprisingly spunky performance and solid handling.