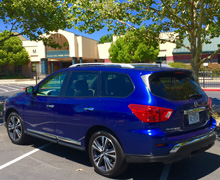 Roseville, Calif. – A mainstay in the Nissan lineup since 1986, the Pathfinder never really distinguished itself. It was mostly recognized as a cumbersome sport utility vehicle that didn’t have mass appeal.

In recent years, the folks at Nissan gradually transformed the Pathfinder in the hopes of gaining admirers, thanks to some smart changes.

The front-wheel drive Pathfinder (all-wheel drive is an option) is one of the original SUV trailblazers and just recently celebrated its 30th anniversary. In that time span it became one of the earliest crossover SUV models, switched back to a truck-based vehicle, and now in its fourth generation is a large, seven-passenger crossover SUV.

The 2017 Nissan Pathfinder added a new powertrain, safety and technology features, and improved the overall driving dynamics. It has more comfort than ever before, has increased its efficiency – getting a respectable 20-27 mpg – and has an enticing base price tag starting at around $31,000.

The three-row, family-oriented crossover SUV increased its performance for 2017, which helped add to its towing capacity (6,000 pounds). The revised V6 engine added 24 more horsepower and 19 more pound-feet of torque, and the changes are noticeable in all driving situations.

The Pathfinder’s gutsier engine is a 3.5-liter, V6 that generates 284 horsepower and 259 pound-feet of torque. It has enough power to climb hills without laboring and demonstrates solid passing capability in freeway situations. It goes an estimated 0-60 mph in 7.3 seconds.

Drivers will notice the sharper steering, giving off a nice sense of control when going around turns that is lacking in some larger SUVs. The ride quality is about average, but some bothersome road noise from the past has been eliminated.

The Pathfinder has an improved overall interior that features a smarter design. We found the controls were extremely user-friendly and the touchscreen growing in size was a needed fix.

Front seat occupants will reside in comfort with good head and leg room. The second row is fine in that department as well. While the third row access is good, it only seats two (many rivals seat three and accommodate eight passengers overall) and those seats aren’t roomy for adults.

Storage isn’t one of the Pathfinders’ strengths. The center console lacks versatility and there are less storage areas throughout the vehicle than most large SUVs. The cargo capacity is about average at 47.8 cubic feet and expands to 79.8 cubic feet with the second and third rows down.

After not sampling a Pathfinder for several years, we were impressed with its overall improvement, especially the performance and handling. Despite those upgrades, the Pathfinder still faces an uphill climb to match some of its competition.