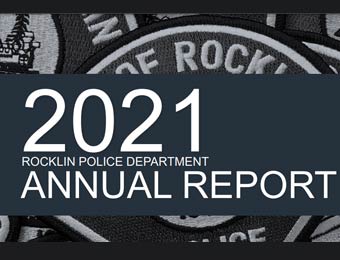 The 2021 report features the traditional statistics on crime, traffic activity and response times, but also has an increased focus on the variety of work done by the different units and divisions of the police department.

“Our goal was to maintain the important data points that we are all used to in this report, but also include some additional information highlighting the good work that our staff does day-in and day-out,” Police Chief Rustin Banks said in his opening remarks.

Since 2005, Rocklin’s population has increased by more than 40% with an average crime rate of 18.3 crimes per 1,000 residents. 2021’s rate is below that average, with more than half of all crimes involving vehicle burglary (44% of all Rocklin crimes) or vehicle theft (11%).

The reported highlighted units including Patrol, which is the largest and most visible unit leading the way in fulfilling the department’s mission “To Serve, Protect and Promote a Safe Community.” Patrol officers are assigned to one of six patrol teams that cover 28 reporting districts and four beats, 24 hours a day, 365 days a year.

Rocklin’s K-9 unit is another well-known section of the PD, with three highly intelligent and trained K9s who, along with their dedicated handlers, removed 86.5 pounds of narcotics from Rocklin streets in 2021.

The Traffic and Community Services unit has traffic officers focused on education and enforcement of traffic laws and community service officers who investigate cold cases, traffic collisions, and animal control.

The full report also highlights the efforts of the Investigations Division, the Homeless Outreach Team, the Small Unmanned Aircraft Systems Team, and more.