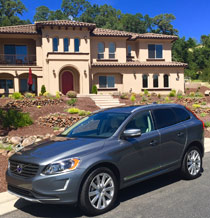 The 2017 Volvo XC60 is showing its age. Recognizing the existing model kept losing ground to strong competitors like the Acura RDX, Audi Q5, BMW X3, Lexus NX 200t, and Mercedes-Benz GLC-Class, Volvo engineers went to work in remaking the popular 5-passenger SUV. A total redesign was done for the 2018 model.

The folks at Volvo hope the XC60 can replicate the success of the redesigned XC90, a full-size SUV that has won multiple awards and symbolizes the Swedish manufacturer’s new direction.

“We have focused on building a car that can deliver pleasure to all of your senses – from a commanding view of the road ahead in a beautifully appointed and calm cabin, to a safe, inspired and confident ride,” said Senior Vice President Product & Quality Henrik Green at the unveiling earlier this year of the 2018 XC60. “We’ve paid particular attention to making life easier for our customers by providing them with the creature comforts and services that take the hassle out of everyday life.”

One thing that couldn’t wait another year was Volvo deciding to abandon its five-cylinder and six-cylinder engines in the 2017 XC60. In their place is the turbocharged T5 engine and the turbocharged and supercharged T6. We’re a big fan of turbocharged models for their ability to combine performance and gas-saving.

The front-wheel drive XC60’s smaller engine is the T5, a turbocharged 2.0-liter, four cylinder that produces 240 horsepower and 258 pound-feet of torque. It has been clocked going 0-60 mph in 6.8 seconds and gets an estimated 23-30 mpg. Test driven here, the turbo T6 provided considerable performance in all driving situations. Both the turbocharged and supercharged T6 have a 2.0-liter, four-cylinder engine that generates 302 horsepower and 295 pound-feet of torque. The gas mileage (20-27 mpg) doesn’t match the T5, but the T6 goes roughly a half second faster going 0-60 mph.

The XC60 offers a comfortable ride and has fairly good handling, but is certainly not among the sportiest models in its class. While not the ideal vehicle to adroitly navigate, tight, curvy roads, the XC60 provides a secure ride overall.

One thing we can always say about any Volvo is overall quality. It regularly ranks near the top in safety and doesn’t believe in going the cheap route to save money in lieu of quality.

Although there’s nothing fancy regarding the XC60 interior, it is smartly designed. Seating is comfortable and roomy for all five passengers. The cargo space is 30.8 cubic feet behind the second row and increases to 67 cubic feet with the seats folded down. One complaint is the navigation and music menus require a learning curve to master.

Knowing the 2018 XC60 will be a total redesign, it could be difficult to pull the trigger on purchasing the 2017 model. However, there are still strong selling points that include the new turbo engines, a solid interior, and an attractive exterior.