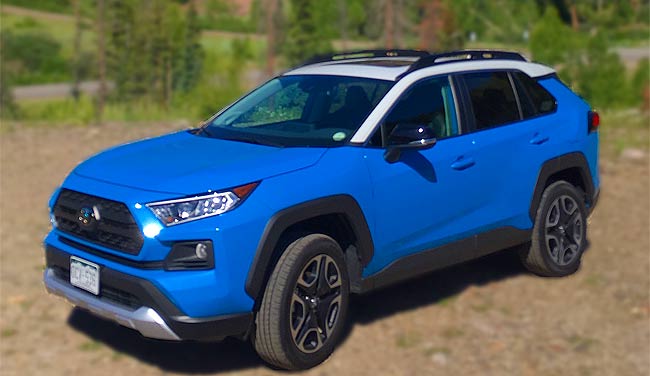 Denver, CO- Any vehicle, large or small, will encounter extreme challenges when traveling through the majestic mountains of Colorado.

Naturally, some vehicles make the arduous journey from Denver to Southwest Colorado easier for a variety of reasons. One of those vehicles is the 2019 Toyota RAV4, a five-passenger crossover sport utility vehicle that offered solid handling, performance and comfort over a stretch of mountainous roads that offer some of the most beautiful scenery this country has to offer.

This year’s RAV4 arrived with some changes, courtesy of a complete redesign. Despite already being the top-selling small crossover SUV on the market, Toyota decided it was time for a change. Improvements included performance, a stylish new look and more technological and safety features.

Although the engine has been improved, note that several RAV4 rivals provide better performance and offer a more powerful engine as an upgrade.

Americans love their compact crossover sport utility vehicles. These smaller SUVs like the RAV4 offer enormous versatility, typically have an appealing design, and are also somewhat sporty. Introduced in Japan and Europe in 1994 and a year later a hit in the American market, the RAV4 has been a class leader for more than two decades.

There was no competition when the RAV4 debuted as the first crossover SUV, but there are many rivals these days. The competition includes the Honda CRV, Ford Escape, Hyundai Tucson, Kia Sportage, Subaru Forester, Volkswagen Tiguan, Chevrolet Equinox, Nissan Rogue, and Mazda CX-5.

Slotted in the Toyota SUV lineup between the three-row Highlander and the subcompact C-HR, the RAV4 has considerable variety, offered in five trim levels (LE, XLE, XLE Premium, Adventure and Limited). We drove the Adventure for six summer days in Colorado and a year ago sampled the RAV4 Hybrid, which won’t be discussed in this review.

The Adventure has a starting price of approximately $33,050 and was a good choice for the rugged Rockies. It featured a unique all-wheel-drive system that provided extra traction when needed. It also has larger roof rails than the typical RAV4, resides on 19-inch alloy wheels, has flared fenders, and all-weather floor mats. The most dramatic element in our opinion is the Adventure can tow up to 3,500 pounds, while other RAV4s are limited to 1,500 towing capacity.

Both the Adventure and Limited models come with an upgraded all-wheel drive system that gives the RAV4 some off-road capability. Among the driver-select features are advanced traction, hill descent control and added ground clearance. While no comparison to some highly developed off-road vehicles, the RAV4 handles itself pretty well for a small SUV.

The 2019 RAV4 cruised along steep mountainous terrain with few struggles, benefiting from its new upgraded engine. The lone engine is a 2.5-liter, four-cylinder that generates 184 pound-feet of torque and 203 horsepower, a 27-hp increase over last year’s model. While not quick from a standing position – 0-60 mph in 9.1 seconds – the RAV4 delivers steady power and experienced no issues in passing other vehicles on the freeway or mountainous stretches of highway. The fuel economy (26-35 mpg) is near the top of its class.

There’s plenty of reasons to be enamored with the RAV4 interior; it’s both comfortable and spacious, especially the cargo area. Many people would swear the RAV4 is a midsize SUV because the cargo space is huge for the class – 37.5 cubic feet that expands to 69.8 cubes when the second row folds down nearly flat to the floor. And the cargo cover rolls up and has an underfloor area that provides additional storage. Even during several long drives, the RAV4 seating never felt uncomfortable.

We applaud the RAV4 interior set up that’s fairly easy to master. Control knob placements make sense and there are no cheap, hard plastic materials to detract from the overall appeal. Apple CarPlay is standard on all RAV4s and the safety features include lane keeping assist, forward collision mitigation with automatic braking, and adaptive cruise control.

A smart redesign keeps the RAV4 where it has always been – near or at the top of the extremely competitive small crossover division. It remains a high-quality SUV that is strong in practically every area.