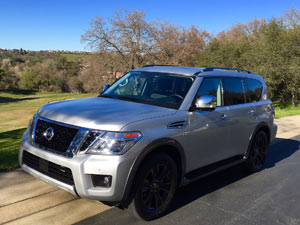 Roseville, Calif. – Historically, changes have not been part of the playbook for the Nissan Armada.

Too many years Nissan decided to stay put instead of making alterations on its full-size sport utility vehicle. And by doing nothing, Nissan was also doing nothing to grow its Armada sales.

From 2004 to 2007 Nissan sold between approximately 31,600 to 39,500 Armadas. It was good times for the large, rather classy SUV that featured three rows and could accommodate eight passengers. But sales dropped dramatically over the next eight years, dipping to14,035 by 2016. The Armada was essentially the same SUV for more than 13 years, which is pretty much an eternity in the automotive world.

So, with its sagging sales a yearly trend, guess what Nissan decided to do? That’s right, the Japanese manufactured finally made changes. The completely redesigned 2017 Nissan Armada was quite different than previous models. The result was a dramatic swing in sales – the new Armada skyrocketed to 35,667 models sold a year ago.

Returning the Armada back to prominence meant that Nissan did little to improve the 2018 version. Because they are so minor, most folks won’t probably notice that the latest changes – an 8-inch touchscreen display, HD radio, hands-free text messaging, additional USB charging ports, NissanConnect telematics services – come standard on all trims.

The 2018 Nissan Armada is attractive and features a sophisticated exterior look. It has ample power, plenty of interior room, and delivers nice utility. The Armada offers a very good four-wheel drive system. No longer will it be a stretch to say the Armada is a cut above the competition. That competition includes the Chevy Tahoe, Toyota Sequoia, Ford Expedition, and the GMC Yukon.

And speaking of competition, the Armada has some in its own backyard. Parent company Nissan offers a similar large SUV in its luxury division – the Infiniti QX80. The two SUVs share the same platform and much of the exterior sheet metal. They also have the same engine and transmission. The primary difference is the Infiniti is more refined, has a little different design and has Infiniti’s signature V-motion grille.

The Armada is Nissan’s largest and most expensive SUV. It comes with one engine, a 5.6-liter, V8 that generates 390 horsepower and 394 pound-feet of torque. It’s been clocked going 0-60 mph at 7.0 seconds, a good time for a vehicle that weighs nearly 6,000 pounds. The Armada accelerates well in all situations and has a smooth seven-speed automatic transmission. Performance is very good, but not everyone will be too enamored with getting 13-18 mpg.

Driven on some challenging mountain roads, the Armada passed the test. The ride is pleasing overall and the braking and maneuvering are strong. The Armada also possesses some solid off-road chops even though the body clearance isn’t abundant.

A classy cabin is part of the Armada makeup. Head and leg room are excellent in the first two rows and third row seating is fairly good, even for adults. The control layout could be better – some of the buttons can be a long reach. Apple CarPlay and Android Auto are standard. The Armada is a good hauler, with 16.5 cubic feet in the cargo area. Fold the third row down and the space grows to 49.9 and it’s 95.4 cubic-feet with both rows down.

The redesigned Armada has doubled its sales and the reasons are numerous. This full-size SUV has a lot to offer and it comes at a reasonable price.