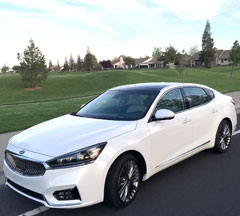 Roseville, Calif. – We’ve become a fan of Kia automobiles over the years, won over by an array of vehicles that are almost universally attractive, affordable and provide solid gas mileage and performance.

It’s been mentioned here a few times in the past that Kia has become a “player” among its automobile manufacturing competitors. The jokes regarding cheap vehicles that were a questionable buy for many years are long gone.

Kia and Hyundai share a symbiotic relationship and have become big-time players these days. Although the brands share factories, engineering and meet at least yearly to discuss final product decisions, Kia and Hyundai operate independently when it comes to marketing, distribution and styling.

One more reason to admire the folks at Kia: the Cadenza. Kia has added the Cadenza to its stable of vehicles that warrants mass appeal. The Cadenza is a large, attractive sedan that comes with a sizable list of standard features and receives high marks for comfort, performance and handling.

Available in the U.S. initially in 2013, the Cadenza is a big improvement over Kia’s last entry into the large sedan category – the Amanti. Around for seven years, Kia grounded the Amanti in 2009 following tepid sales.

The 2017 Kia Cadenza has been revamped in what Kia describes as “an emphasis on comfort over sportiness” in upgrading the popular near-luxury sedan. It’s among the best buys in its class, along with rivals like the Chevrolet Impala, Toyota Avalon, Ford Taurus and the Dodge Charger.

There’s only one engine offered with the Cadenza, an efficient 3.3-liter, V6 that produces 290 horsepower and 253-pound-feet of torque, teamed with an eight-speed transmission. The acceleration is not exciting, but very capable. The Cadenza has been clocked going 0-60 mph in 6.8 seconds, which about average for the class. It hesitates a bit when additional power is quickly needed in passing situations. But overall, there’s no problem here with the overall performance.

It would be nice if Kia added a V8 as an option. Another thought is offering a hybrid or a model with a popular turbocharged engine. For now, one engine is all that’s available. Gas mileage is 20-28 mpg and there is an Eco mode for gas-conscious drivers.

The Cadenza is not considered athletic, but it delivers solid handling and doesn’t have issues when faced with challenging turns or on curvy roads. The braking is good and gives the driver lots of confidence. The Cadenza also delivers a very quiet ride.

Kia Cadenza designers put together a terrific interior. It features an expansive cabin that is smartly designed and has a nice blend of technology, yet is also fairly intuitive. The knobs and buttons are well placed and so is the touchscreen.

The Cadenza provides terrific room and comfort for both front and backseat occupants. There’s no problem in the back seat, where head and leg room are extremely generous. The trunk is also spacious – 16 cubic-feet.

If you’re shopping for a near-luxury car, the 2017 Kia Cadenza is worthy of a look. It’s priced well and has many qualities that car buyers are seeking in a quality sedan.