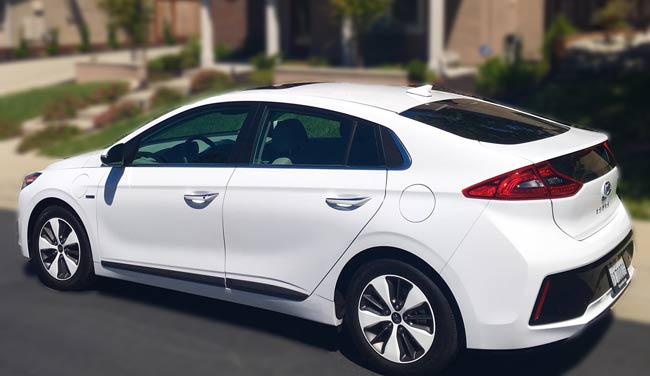 Roseville, CA- Anyone interested in purchasing the 2019 Hyundai Ioniq better be proficient at decision making.

That’s required, because the Ioniq comes in three distinct models – and all three of them are appealing. The Ioniq is the first vehicle worldwide that’s available with three different types of electrified powertrains on the same platform.

Heading into the summer months, the Ioniq Electric just happens to be the most inexpensive compact four-door EV on the market, starting at around $30,400. And federal and state rebate incentives drop that sticker price to an even more enticing figure.

The front-wheel drive Ioniq Electric is offered in a hatchback body style and has two trims. The Base model is well-equipped, but the more expensive Limited version naturally adds more extras. There are no major changes for the 2019 Ioniq EV, which was originally introduced in 2017.

For forward-thinking folks who want to travel via EV mode only, the Ioniq Electric is quite tempting. But not so fast on that decision. Hyundai also offers the Ioniq Hybrid and the Ioniq plug-in hybrid (PHEV). Regardless of which model is chosen, what car buyers will be getting is a premium compact vehicle that has a sporty exterior, is extremely fuel efficient, and can be driven off the dealer’s lot for a reasonable price.

At first glance, the Electric and Hybrid models appear the same. But look a little closer and one can see the difference: the grille is sealed off in the Ioniq Electric, replaced by a glossy black panel that blends in well with the exterior design. The reasoning makes sense: the EV model has no radiator because there’s no engine. All Ioniq models have a have a flat roofline that was designed to get maximum aerodynamics.

Ioniq Electric vehicles have a 28-kWh lithium-ion battery pack that is located beneath the rear seat. It travels 124 miles on a charge, which is less than some of its competitors. Using a Level 3 DC fast charger, the Ioniq can reach 80 percent of its charge within 23 minutes. A full recharge from a 240-volt charger takes about 4.5 hours.

Reportedly, the 2020 Ioniq EV battery will be more than one-third larger at 38.3 kWh, meaning drivers can go even further between charges. For the first owner, Hyundai provides an unlimited battery warranty in case of failure.

The Ioniq has an 88-kW electric motor that generates 118 horsepower and 218 pound-feet of torque. We didn’t feel like the Ioniq was lacking performance. Although not quick off the line, it delivers well in freeway passing situations and can climb steep hills adequately. It goes approximately 0-60 mph in 8.9 seconds; not bad for the segment. The Ioniq EV gets an impressive 122-150 mpge.

All Ioniq models deliver solid handling, accurate steering and maneuver well in tight spaces. Unlike the Hybrid model, the Ioniq EV doesn’t have a sport mode that enhances the driving experience.

The Ioniq interior is fairly roomy for a compact vehicle, offering both solid head and leg space up front, where it’s capable of accommodating people of all sizes. Yet the same can’t be said for the back seat where three people is definitely a crowd. The cargo area measures 23.8 cubic feet and the 60/40 rear seats fold down nearly flat, greatly enhancing the hauling capability.

The interior layout is smartly designed and most people will enjoy the intuitive controls and the overall technology. The Base model comes with a 7-inch touchscreen, Bluetooth, Apple CarPlay and Android Auto smartphone integration.

Despite its appeal, the Hyundai Ioniq EV has not been a big seller. Other than its unimpressive range of 124 miles, it fills the need of many conscientious car buyers seeking an EV. Gas mileage is terrific for this capable compact that comes with an alluring price tag.