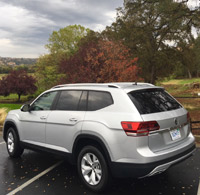 Roseville, Calif. – Looking to fill what it considered a void in its sport utility vehicle offerings, Volkswagen developed the 2018 Atlas.

The all-new Atlas is a three-row, seven-passenger, midsize crossover SUV that gives Volkswagen a full-sized people mover that many larger families are seeking. Volkswagen also offers the smaller Tiguan and the high-end Touareg, a classy midsize SUV that doesn’t have a third row.

The Atlas has some serious competitors in the Honda Pilot, Ford Explorer, Nissan Pathfinder and Toyota Highlander.

Designed and built at its Chattanooga plant in Tennessee, Volkswagen purposely went after American car buyers with the Atlas. Not only is it a roomy SUV, the Atlas is also priced well, starting at approximately $31,450.

Although smaller than many of its rivals, the Atlas was smartly designed by VW engineers and offers considerable interior room, especially in the third row, where space is typically limited.

The third row offers solid head and leg room for even tall adults. It’s also easy to enter and exit for any size passenger. Even with the three rows in use, the Atlas has fairly good cargo space at 20.6 cubic feet, and that expands to 55.5 cubic feet with the third row folded (flat to the floor).

There’s also considerable room and comfort for front seat occupants and folks in the second row. The seating is spacious and supportive, giving the Atlas the rare ability to satisfy all seven passengers.

The major weakness in the 2018 Volkswagen Atlas is performance. The base model features a 2.0-liter, turbocharged four cylinder that produces 235 horsepower and 258 pound-feet of torque. Acceleration is weak, especially with a full load of gear and seven passengers.

The other engine choice is a 3.6-liter, V6 that generates 276 horsepower and 266 pound-feet of torque. But this model is sluggish as well, going 0-60 mph in 7.9 seconds. For example, the Honda Pilot goes approximately a second faster at 6.9 seconds.

The smaller Atlas engine gets respectable gas mileage at 22-32 mpg, while the V6 registers 17-24 mpg.

We weren’t thrilled with the performance of the Atlas, yet it does possess precision handling that gives the driver a strong sense of confidence. The eight-speed automatic transmission shifts with refinement and provides a smooth, stable ride and handles tight turns adroitly.

Besides considerable space, the Atlas also has other admirable interior qualities. The design is nothing fancy, yet smartly done. The Atlas utilizes high-quality materials and has an upscale feel. The cabin is quiet and the ride is soft and pleasant.

The Atlas has an uncomplicated dashboard with easy-to-master dial buttons and controls that are large and simple to maneuver. The rear seats don’t get shortchanged; they have vents and separate temperature and fan controls.

Volkswagen designed a quality SUV that is terrific concerning overall space. It has a refined ride and a very efficient interior. The only blemish is the lack of performance.