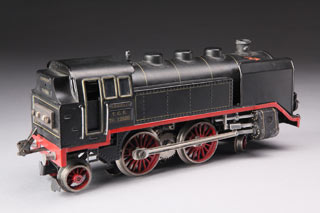 SACRAMENTO, Calif. – California State Parks and the California State Railroad Museum & Foundation are proud to recognize August 2018 as Toy Train Month, an annual celebration that spotlights the popular Thomas W. Sefton Gallery and “Small Wonders: The Magic of Toy Trains” exhibit. Coinciding with Toy Train Month, the Railroad Museum will debut a newly-acquired collection of pre-war toy trains and accessories manufactured by the German company Märklin that will be available for public viewing from August 1 through September 2, 2018.

This latest display of toy trains was originally procured by an American soldier during WWI directly from the Märklin factory in Göppingen, Germany, and was sent as a gift to his newborn son in Arkansas. As payment for the collection, the determined soldier bartered a large Hershey’s chocolate bar for the toy steam locomotive – black in color with red pinstripes and red spoke wheels – and a carton of Lucky Strike cigarettes for the remainder of the collection. The California State Railroad Museum acquired the prized collection earlier this year as the result of a donation from one the Museum’s dedicated docents.

This limited-time collection of pre-war toy trains and accessories will go on display near the Museum’s extensive and internationally recognized toy train collection that was donated by the Sefton family in 2002. Accumulated over four decades by the late Mr. Thomas W. Sefton, the collection includes 20th century toy trains, Buddy “L” riding toys, and railroad-related artifacts, featuring approximately 7,000 toy trains and a variety of accessories, such as locomotives and railroad cars from companies including Buddy “L,” Ives, American Flyer, Marklin, Marx, and Lionel.

Railroad Museum admission is $12 for adults, $6 for youths (ages 6-17), and children ages five and under are free. More information about the California State Railroad Museum is available at 916-323-9280 or www.californiarailroad.museum.