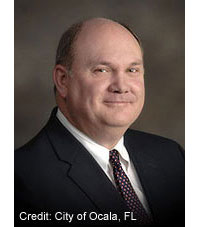 Horst is currently the City Manager of Ocala, Florida, a community of 55,000 residents. Previously, he served as City Manager of South Jordan, Utah (pop. 54,000) for nearly nine years. His 20-year public service career also includes three other city manager assignments in cities in Utah and Florida. Horst holds two master degrees, one from Brigham Young University and one from Troy State University and is a credentialed city manager by the International City/County Management Association.

Horst has specific experience in Redevelopment and economic development. He was a direct contributor to the drafting of the Utah Redevelopment Law. He was nationally recognized for his team’s innovation in finance management and sustainability. Similar to Rocklin, South Jordan was ranked in the top 100 cities to live by Money Magazine, ranking 18th in the Nation.

Mayor Yuill stated:  “Rick was the unanimous choice of the City Council. The entire City Council was impressed with Rick’s depth of experience, his demeanor, and his commitment to Rocklin. Rick has a strong background in economic development which was of particular importance to the City Council.” Horst is married to Cynthia and has children and grandchildren living in Florida and Utah.

A Council committee consisting of Brett Storey and Peter Hill are negotiating the employment contract with Ricky Horst. The contract is expected to be considered by the City Council at the December 14, 2010 regular council meeting. Horst is expected to start work in Rocklin in early to mid February.