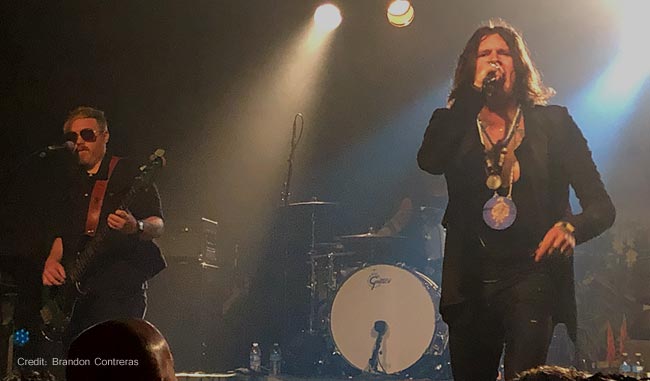 Sacramento, CA- Following some preshow libations at The Snug, a new Sacramento bar featuring great décor, music and delicious cocktails, I sauntered into the adjacent Ace of Spades to catch opener Sheepdogs, a Canadian rock band formed in Saskatoon, Saskatchewan.

This was the first time seeing them live and they didn’t, for one second, disappoint. Good ol’ straight-ahead, seventies era blues, southern rock presented with psychedelic stage presence, lashing guitar licks and harmonizing vocals. Positioned stage right, I was able to capture all the blistering-winding bass runs and grooves courtesy of Ryan Gullen. It was a feel-good, head-bopping, feet-moving opening set that reaffirmed this genre is still powerful and Sheepdogs delivery adds a huge exclamation point to that sentiment.

After a rapid stage conversion (props to all the gear guys and gals, one of the fastest intermissions I’ve experienced) Rival Sons took the stage to the slammin’ drums and hard-heavy guitar sound of Back In the Woods. Their set was a non-stop tour de force. The band energetically and briskly moved through most tracks on their Feral Roots album. Rival Sons sound is guitar heavy, bass empowering, drums dominating and punctuated with Jay Buchanan’s amazing vocal delivery. Rival Sons had all of us fans fist pumping, body moving and screaming near the top of our lungs.

Roughly midway through the set Jay had an inspiring and motivating preamble about positivity, pushing forward, being true to yourself just prior to performing one of their soft-ballads, Jordan. He mentioned his time living and recording in Leipers Fork, Tennessee (big props to this hidden gem outside of Nashville). From first song to closing he delivers above and beyond 100%. His energy is infectious with a presence that engulfs the stage. Catching up with Jay after the show, he comes across as a cool laid-back sort of cat, non-pretentious and approachable.

Rival Sons have no issue pulling you in and forcefully guiding you on a near two hour journey of thrashing, hard-hitting rock n’ roll. If you haven’t seen them live, be certain to catch them on future tour dates or hopefully on a return stop to Ace of Spades, Sacramento.

Brandon Contreras from Rocklin is an avid concert-goer and bass player. When not attending countless live shows or hanging with family and friends, he can be found sampling difficult to pronounce libations up and down the Western Hemisphere while calculating his frequent flier miles.