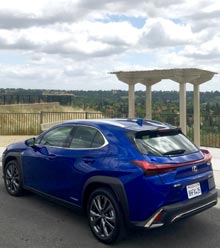 Roseville, CA- From this vantage point, the opinion has always been that Toyota and its luxury brand – Lexus – has always excelled in the sport utility vehicle category.

The first SUV sampled here many years ago was the Toyota Landcruiser. Impressed with its overall makeup and a few other subsequent SUV samplings from the Japanese automaker, it wasn’t long before my family owned a used Toyota 4Runner that started out as my “ski buddy” and later became my daughter’s first car. It was around for about a dozen years.

What has always struck me about the SUVs is how many that are offered. Take your pick – subcompact, compact, midsize, large, hybrid – they are all included in the Toyota-Lexus stable.

Lexus now offers three versions of an SUV hybrid – the midsize RX, the compact NX, and the subcompact UX. We’ve previously sampled the first two and now have the trifecta, given the opportunity to spend a week driving the 2019 Lexus UX 250h.

Subcompact crossover SUVs are popping up seemingly everywhere. But Lexus doesn’t have a lot of competition yet in the luxury class. Probably its main competition is the Mini Countryman, a versatile plug-in hybrid (PHEV) that even has some off-road capability.

We would be the first to admit, the UX is not for everyone. This is not what most people would slot in as the family SUV. However, for an active person it can be an ideal vehicle to make the most of some adventures, even though it’s not made to travel off-road.

What stands out regarding the all-new 2019 Lexus UX 250h is its physical appearance, cool interior makeup, and its fuel efficiency. This hybrid powertrain gets 39-41 mpg and can travel an estimated 412 miles on one tank (12.5 gallons) of gas.

The UX exterior features an angular front end, an hourglass grille, cool lightening bolt-like headlights, and an LED light bar that stretches across the full width of the tailgate. The interior is stylishly configured, has plenty of techie qualities, and enough room for two or three people to load up and head out on a road trip.

The UX 250h gets dinged for its suspect performance. But we found it to be more than adequate in our travels. The hybrid model engine is a 2.0-liter, four-cylinder with 181 horsepower (12 more hp than the standard UX 250). The experts say it only goes a modest 0-60 mph in 8.5 seconds, yet it feels much quicker, especially in sport mode. What slows it down is the curb weight of 3,600 pounds. It can reach a top speed of 112 mph.

Not only was the power sufficient, the UX 250h was also fun to drive. It has the stability to zip around corners, maneuver adroitly into small parking spaces, and handles itself well on challenging roads in a sporty fashion. The 250h has a base model and the F Sport trim features the performance package.

While the layout is impressive, not everything is perfect. The infotainment system is not user-friendly for the driver because it can be distracting, especially for a newcomer. Although the vehicle seats five, more than two people in the back seat is a real squeeze. The seating is comfortable up front and there’s also good room (for two) in the back. The cargo area is limited (17.1 cubic feet).