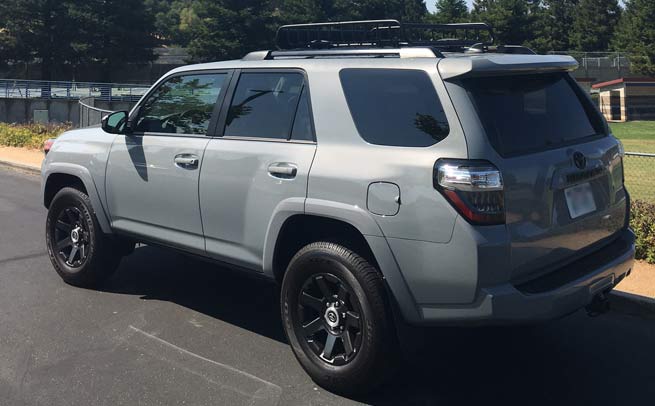 Roseville, Calif.,- The 2021 Toyota 4Runner hasn’t changed much over the past decade – it’s a midsize sport utility vehicle workhorse that remains old school in so many ways.

Make no mistake, the 4Runner is still popular among SUV buyers. Last year, sales hit 129,052 and have not dipped below 111,000 the past five years.

If owning a rugged SUV is the desire, the 4Runner is worthy of consideration. However, if smooth-running crossover SUVs are more your style, then a 4Runner should be crossed off the list.

Regardless of one’s opinion, there’s little argument the venerable 4Runner could use a major redesign – it’s long overdue. Toyota last redesigned the 4Runner in 2010.

There are minimal changes for the 2021 Toyota 4Runner. The Japanese automaker added a Trail Special Edition and standard LED headlights for all models.

The 4Runner is a truck-based SUV that’s mired in the past. It remains a boxy-shaped SUV in a world where many of its most popular competitors are generally sleeker and more low-slung.

Although it remains old school, the 4Runner will perform just fine when running local errands or doing the every-day commute, thanks to its ability to deliver a smooth ride and solid cornering. But where the 4Runner stands out is off the beaten path where it can pursue exciting adventures.

It possesses a multimode four-wheel-drive system, high ground clearance and special TRD features that make it capable of tackling rugged and rocky terrain. The highly-regarded TRD Pro trim is equipped this year with Fox shock absorbers that improve off-road performance.

We sampled the new Trail Special Edition for a week. It’s distinguished by a large Yakima roof rack and a huge 40-quart beverage cooler that can come in handy during day trips or weekend excursions.

If a complex interior touchscreen leads to frustration, no worries, that won’t happen in a 4Runner. It has easy-to-understand controls on its standard 8-inch touchscreen that make it simple to master menus and won’t require staring at the screen for long periods. Both Apple CarPlay and Android Auto smartphone connectivity come standard.

Seating is spacious in the 4Runner for front and back rows. The SUV has a sizable squared-off cargo area that measures 47.2 cubic feet and expands to 89.7 cubes when the second row is folded to the floor.

The 2021 Toyota 4Runner maintains its roots, characteristics that have kept it a popular selling SUV for years. It is rugged in nature and perfect for going off road. There are nine trim models, so be careful in picking the one that most suits your needs.