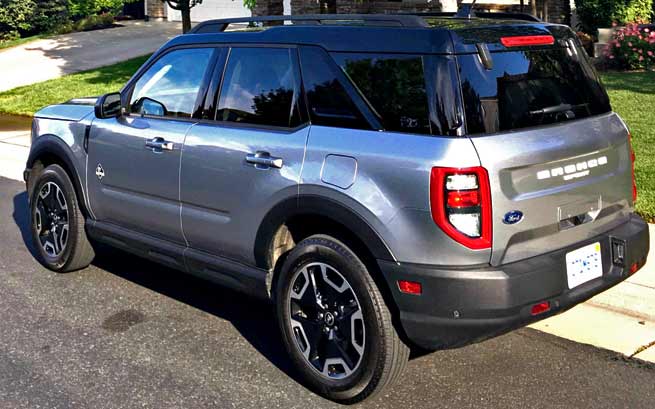 Following a 24-year absence, the Ford Bronco is back.

Roseville, CA- That’s right, the attractive sport utility vehicle that once famously transported OJ Simpson on his made-for-TV, low-speed police chase along a Los Angeles freeway has returned. And judging from early sales figures -23,356 sold in the first three months of 2021 – the Bronco comeback is in full swing.

It’s still being built in the same Michigan assembly plant in Wayne, where production took place for 30 years (1966-1996) before the company decided to pull the plug on the popular Bronco because consumers wanted a four-door, full-sized SUV, and Ford didn’t have one at the time.

The sixth generation Bronco comes as a full-size SUV or a compact Sport model. This review will focus primarily on the 2021 Bronco Sport, driven here for a week. The compact Sport is more fuel-efficient, but features a smaller interior. It’s similar to the compact Ford Escape, sharing the same transmissions, engine options, and standard safety features

In reintroducing the Bronco, Ford clearly has its sights on the Jeep Wrangler and its terrific off-road reputation. Engineers made off-roading capability a clear priority over traditional crossover comfort when designing the Bronco.

Although not as proficient as the larger model, the Bronco Sport has a cool exterior and can still travel off the pavement with some proficiency. It comes with standard all-wheel drive, an 8.8-inch ground clearance, multiple traction settings, and lots of optional off-road upgrades.

Much like the Wrangler, the downside regarding the Bronco Sport is the ride is not great when on normal road surfaces. Don’t expect it to drive smoothly like a top crossover models like the Honda CR-V, Toyota RAV4 or Mazda CX-5. The steering feel is not top-notch and the transmission shifts are also irregular at low speed.

The standard engine for the Bronco Sport is a turbocharged (Ford calls it EcoBoost) 1.5-liter, three-cylinder that produces 181 horsepower and 190 pound-feet of torque. It gets 25-28 mpg, which falls short of the competition. The optional engine is a more powerful, a turbo 2.0-liter, four-cylinder that generates 250 horsepower and 277 pound-feet of torque. It goes 0-60 mph in 7.2 seconds and gets 21-26 mpg.

The Sport interior isn’t elaborate, but is fine overall. It comes standard with a Sync 3 infotainment system, an 8-inch touchscreen, and Apple CarPlay and Android Auto integration. The control placement was smartly done and has several selectable drive modes.

The front seat is solid, offering lots of overall space, good headroom for taller individuals and leg room is also good. However, second-row seating lacks overall leg room and will be cramped for three people. The cargo space is ample for a small SUV – 32.5 cubic feet behind the second row and 65.2 overall.

The Bronco is back and seems destined for a good first year of sales. If shopping for a compact SUV with genuine off-road credentials, the Bronco Sport is a viable choice.