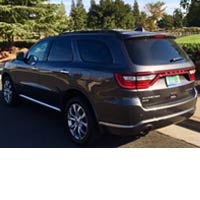 Roseville, Calif. – A week of traveling along the central coast of California and a journey home to the northern part of the state proved quite the test for the 2017 Dodge Durango.

Although one might be skeptical about a long journey in a vehicle this size, the large crossover sport utility vehicle was up for the task. The Durango is very suitable for a family or even two people vacationing for a week.

What we liked most about the Durango was its comfort. Even a sizeable five-hour trip home was no problem, thanks to the cozy seating that never was an issue for a lower back that sometimes stiffens on long trips. We were also fond of the ride. For a big SUV, the Durango was easy to handle and left this driver with a good feel for the road.

The Durango offers great head and leg room for front seat occupants and similar comfort for up to seven people who can fit into the three rows of seating. What’s surprising is even adults have ample room in the third row – a rarity in most SUVs. Both second and third row passengers will discover they can enter and exit the Durango with relative ease, thanks to the large rear doors that open to almost 90 degrees.

Other strong points concerning the Durango interior are ample soft-touch surfaces, second row seating that flips and folds, sizable 8.4-inch touchscreen, and maximum cargo space of 84.5 cubic feet. Note that the space behind the third row is small, yet it will fit a large golf bag. An optional cargo cover is also a nice touch for concealing anything stored in the back end of the SUV.

The Durango, which has the same underpinnings as the Jeep Grand Cherokee, is probably due for a redesign because the last one took place in 2011. Yet three years ago some improvements were added to this large SUV that has become a modern-day station wagon, thanks to its family-friendly nature.

Around since 1998, the Dodge Durango has always been a suitable hauler. The V6 version has a towing capacity of 6,400 pounds, while the Hemi model can tow 7,400 pounds, a weight that can rival some truck-based SUVs. The Durango is heavy, weighing 5,078 pounds. That’s a lot more than many of its competitors, including the 4,250-pound Honda Pilot.

The Durango comes with two engine choices. We had the standard model, a 3.6-liter, V6 that generated 290 horsepower and 260 pound-feet of torque. Our Citadel model upped the horsepower to 295. There were no instances where power was lacking. And given the Durango’s overall size, that’s saying a lot. Acceleration was very good in freeway passing situations and the Durango climbed some steep mountainous grades with no issues. The vehicle goes 0-60 mph in 7.8 seconds and actually felt quicker than that. Gas mileage is 19-26 mph

The other engine is a 5.7-liter, Hemi V8 that produced 360 horsepower and 390 pound-feet of torque. Gas mileage is predictably less than the smaller engine, getting an estimated 14-22 mpg. Both engines are paired to an eight-speed automatic transmission.

Although the Dodge Durango gets overlooked in a segment that includes the Chevy Tahoe, GMC Acadia, Honda Pilot, Mazda CX-9, Toyota Highlander, and Ford Expedition, it’s no slouch. It provides a comfortable ride for seven people, has significant power, fantastic towing capacity, and handles well for a big SUV.