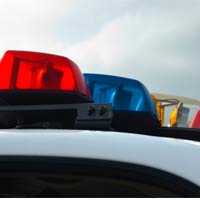 At roughly 4:15 p.m. the 12 year old exited his school bus near Sharp Circle and Breuner Drive. As he waited for his mother to pick him up a vehicle drove past him and then circled back around.

The male inside the vehicle initially asked the boy if he wanted a ride home. The boy declined the offer. Then the male became very aggressive and demanded the boy “GET IN THE CAR!” The boy ran away and the vehicle sped away down Harding Blvd (unknown direction.)

The vehicle is described as a bright lime green 4 door sedan with dark interior with some rips on the seat. The rear windows were tinted black. There was noticeable oxidation on the hood of the car.

The suspect is described as a white male adult in his mid-30’s, wearing a black hoodie with the hood on his head. Brown beard with some gray, with brown eyes. The suspect appeared dirty (as if coming from work).

Roseville Police is asking anyone with information on the suspect, the vehicle, or this incident to please call the Police Department at 916-774-5000 option 1 to report a crime.