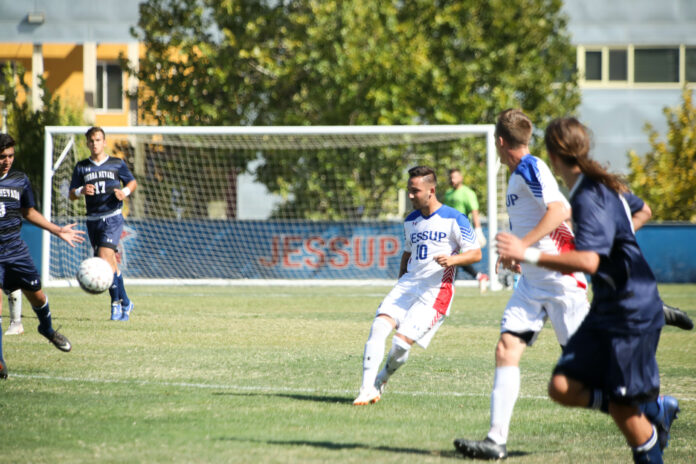 The Warriors took the lead early off of an unassisted goal by Paul Anderson from far left in the 24th minute. It was Anderson’s fourth goal of the season. The rest of the half was a back and forth battle as neither team held the advantage. Both the Warriors and the Mustangs had five shots in the first half, but the Mustangs drew five fouls to the Warrior’s two.

The second half was quiet, both teams held their own as the rain picked up for the match. The Mustangs upped the pace of play with nine shots in the second half, but the Warriors kept up, taking six shots of their own. The score held until the 86th minute when Johnny Muresan scored on a free kick from 20 yards out giving the Warriors a 2-0 lead. That was Muresan’s second goal of the season.

Overall the Warriors took 11 shots, six on goal, while the Mustangs sent 14, with six being on goal. Nick Garcia was instrumental in maintaining the Warriors’ lead, as he made impressive saves on all six of the Mustangs’ shots on goal. Garcia has 37 saves on the season.

The Warriors had 15 fouls to the Mustangs’ 11. The Warriors were handed two yellow cards, both in the second half.

Jessup will return home for Saturday for a match against San Diego Christian at 11:00 AM.