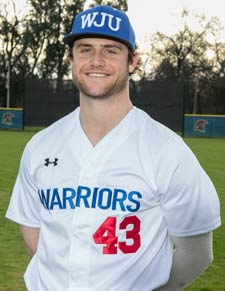 Rocklin, Calif. – William Jessup University added another first to the baseball program’s 2018 historical run with the announcement that Andrew Shaps was selected by the Los Angeles Dodgers in the 31st round of the 2018 Major League Baseball Draft.

“I can’t say enough good things about William Jessup and my experience with the baseball program,” Shaps said. “They took a chance on me during a crucial time in my baseball career when they didn’t have to. The coaching staff and each player on that team welcomed me in from day one and I’m so proud to become the first player drafted out of Jessup!”

An outfielder and pitcher, Shaps was a senior transfer who joined the Warriors from Paradise Valley, Ariz. The 994th overall pick in the draft, Shaps was an instant contributor offensively and defensively to start the season. But due to an injury early in the season, Shaps would support his team in other ways he hadn’t expected.

“Although his season was halted by injury, it was a real privilege to coach Andrew,” William Jessup first-year head coach Jake McKinley said. “He was an excellent teammate and was extremely coachable. He’s come a very long way in the last few months and this accomplishment deserves celebration.”

In his 31 appearances this season, Shaps started in 17 games as an outfielder, including the season’s first 15 games. In his 64 plate appearances, he had 29 hits, 27 runs, 13 RBI, and batted .453, which led the team. Post-injury, Shaps would pinch-run for the Warriors and made six appearances as a pitcher.

In a historic turnaround, the Warriors went from a 10-win season in 2017 to a program-best 41 wins in 2018 and their first-ever trip to the NAIA Opening Round, which the Warriors hosted at McBean Park in Lincoln. They were one win away from going to the NAIA World Series.

Shaps became the fifth overall MLB draft pick coached by McKinley, and the 14th that has gone on to play professional baseball after being drafted or signing as a free agent.

“Now that the season is a few weeks expired, it’s easier to look at it from an aerial view and realize just how special it was,” McKinley said. “We had an awesome group of players, coaches that worked extremely hard, and an administration that showed us great support. It was a collective effort and I feel really blessed just to have been a part of it.”