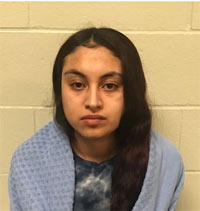 Rocklin, CA- During the early morning hours of January 5th, 2020, Rocklin PD responded to the report of a vehicle burglary at the 1300 block of Ridgeview Circle.

Upon their arrival, officers located several vehicles that were burglarized. As the officers were actively investigating these burglaries, they received calls of a burglary in progress at another location.

The Roseville Police Department located a vehicle in their jurisdiction. Officers conducted a traffic stop on this vehicle and officers contacted Mia Gonzales, Larry Smith and a 14-year-old male juvenile. During a search of this vehicle, the officers located property from the vehicle burglaries in Rocklin.

It was with the teamwork between Roseville PD and Rocklin PD and a thorough investigation by the officers that three subjects were arrested for multiple charges.

If you have information about any of these burglaries or are a victim that has not yet reported you may contact the non-emergency number at 916-625-5400.