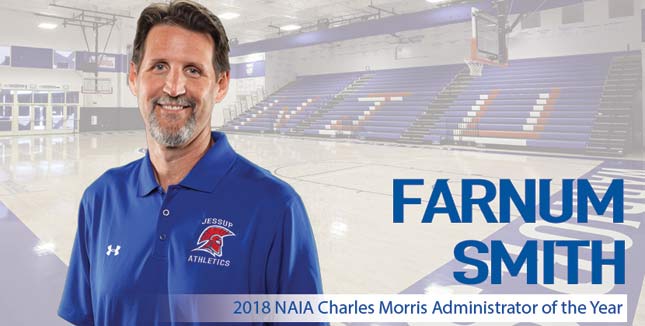 Rocklin, CA – For nearly 30 years Farnum Smith has dedicated more than just his time to the William Jessup Athletics Department but his servant leadership has been an integral component in building a successful department, raising up future leaders in student-athletes, and for that, he has been named the 2018 NAIA Charles Morris Administrator of the Year Award.

“Farnum Smith is undoubtedly one of the most loyal and enthusiastic athletic administrators that I’ve had the pleasure of calling my colleague,” Athletic Director, Lance Von Vogt said. “Farnum’s nearly 30 years of service to William Jessup University Athletics is without question the most instrumental component of the success that we enjoy today competing in the competitive Golden State Athletic Conference of the NAIA. Farnum is the definition of a servant-leader and we couldn’t be more fortunate than to know that he brings this energy and high moral fabric to our athletics community every single day.”

Serving the last five years as the Senior Associate Athletic Director, Smith continues to make an impact on all those who he comes in to contact daily both in the athletic department and across campus. As the Charles Morris award winner, he is honored for traits of the late Mr. Morris who exemplified loyalty and enthusiasm as an engaged administrator in all NAIA programs.

In 2004 Smith led the force in transitioning to the NAIA and into the California Pacific Conference membership. By 2012 he had developed 12 athletics teams, as well as a move into membership with the Golden State Athletic Conference in 2014-15.

Von Vogt commented on the transitions, “Farnum oversaw the application and transition into the NAIA approximately 13 years ago. During that transition and every day since then, he has met every challenge with character, integrity and enthusiasm.”

Since joining the NAIA Smith has continued to lead the force in many areas of development for Jessup Athletics. His dedication to the student-athletes includes leadership in areas such as facilities, eligibility, game management, sports administrator, Title IX coordinator, fundraising, outreach and much more.

Golden State Athletics Commissioner Mike Daniels is honored to have leaders such as Smith in the conference, “We are tremendously happy for Farnum receiving this honor. He is an exceptional person that has always gone over and beyond what is asked of him. He is an asset to William Jessup, and the GSAC, and all of the students of which he serves.”

But the loyalty of the seasoned Warrior branches beyond athletics and impacts all students at William Jessup as Smith and his wife spend most summers for two weeks or more leading Jessup students in the mission field, these last two seasons serving in Russia.

Smith exemplifies the heart of a Warrior with his servant leadership, giving spirit and selfless approach in what can be an overwhelming and sacrificing career in collegiate athletics.

Dr. John Jackson, President of William Jessup University since 2011 concluded, “I join with the entire University Community in celebrating this award given to Farnum. We celebrate Farnum’s legacy of faithfulness to Jessup, and to all of our student-athletes.”