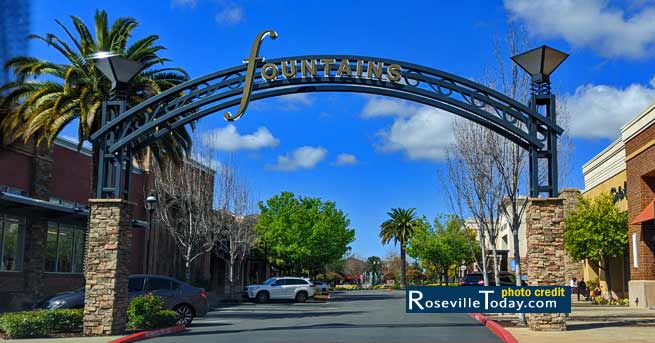 (Roseville, CA, June 24, 2008) – Fountains at Roseville, the first lifestyle center of its kind in the Sacramento region, is fast approaching its grand opening on June 30, and event plans are in place for the new center to “make a splash” in the market immediately.

On June 30th, there will be a ribbon cutting event with the Roseville Chamber of Commerce at 10am.  We’re proud to introduce so many new businesses to the market with the chamber, said Gloria Wright, property manager. Our custom-built train ride, children’s interactive fountain and main showcase fountain will be premiering then as well, she said. The first wave of stores will open June 30th with a number of others coming on-board in the months to follow.

Activity in the common area only grows from there.  There will be an abundance of live entertainment at Fountains at Roseville throughout the month of July, Wright added. The first few weeks and every weekend in July will see a number of live musicians and children’s entertainers.

In August, the music really starts.  At 6pm on August 2nd, we’re hosting Garatt Wilkin & The Parrotheads, a renowned Jimmy Buffet Tribute band, Wright said.  It’s a summer kick-off concert for the residents that we felt would be a lot of fun.  After August 2nd, live bands will continue to entertain Fountains at Roseville guests every Friday and Saturday night from 6pm to 8pm from August 8th to September 6th.  The summer will simply be nonstop, she said.

Set in an extraordinary, ambient streetscape, Fountains at Roseville is the first lifestyle center of its kind in the Sacramento region.  It will debut a number of premier shops to the area, including Anthropologie, DSW Shoes, Orvis, West Elm, Smith & Hawkin and Sur La Table.  Still others include Whole Foods Market, Coldwater Creek, California Pizza Kitchen, White House/Black Market and McCormick & Schmick’s.  The center’s namesake is a centerpiece fountain that performs with illuminated jets of water choreographed to music.