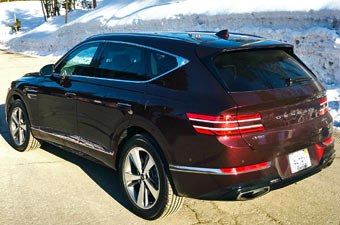 Did the safety features of the 2021 Genesis GV80 help save the life of Tiger Woods?

Roseville, CA- The legendary golfer suffered severe injuries to his lower right leg and ankle in the Monday morning (Feb. 24) crash near the hilly Palos Verdes area of Los Angeles. A seat belt played a large role in saving his life, but the safety features of the Genesis GV80 were definitely a contributing factor.

After seeing the mangled Genesis GV80 lying on its side after the rollover crash, one wonders how anyone could have survived.

“I will say that it’s very fortunate that Mr. Woods was able to come out of this alive,” said Carlos Gonzalez, a Los Angeles County sheriff’s deputy who was the first to arrive at the crash following a 911 call.

“The front end was totally destroyed, the bumpers, everything was destroyed, (but) the airbags (were) deployed,” Los Angeles County Sheriff Alex Villanueva said. “Thankfully the interior was more or less intact, which kind of gave him (Woods) the cushion to survive what otherwise would’ve been a fatal crash.”

Although its vehicles have been generally praised, the Genesis brand has been somewhat anonymous with lackluster sales since debuting the G90 sedan in 2017. Despite the struggling sales, from a safety perspective, Genesis has performed well. Genesis vehicles and other models from its parent company – the Hyundai Motor Group – have historically fared well in various safety tests.

Because the rear-wheel drive (optional all-wheel drive) Genesis GV80 is so new, it is still awaiting a safety rating from Insurance Institute for Highway Safety (IIHS).

It’s been speculated that Woods was probably exceeding the speed limit. However, Villanueva said one day after the crash that “this remains an accident. An accident is not a crime.”

While the focus is clearly on Woods and his overall health and recovery, there’s no arguing that the well-publicized crash has shined a huge spotlight on the Genesis brand.

In recent years, Genesis has been sponsoring sporting events, including the Genesis Invitational golf tournament that Woods hosted last week at LA’s Riviera Country Club. Woods was loaned a Genesis GV80 for his personal use and Max Homa was given one for winning the golf tournament.

Safety is not the lone strength of the GV80. It delivers a smooth ride, offers good performance, a bunch of technology features, a solid cabin, and can be purchased for an attractive price – roughly $50,000.

Like many luxury SUVs, the Genesis GV80 has an appealing interior that’s roomy and comfortable. It has synthetic leather seats and 12-way power adjustable heated front seats with lumbar support. The second row offers good head and leg room for all three occupants. The optional third row is cramped for anyone other than small kids. The cargo area is huge (33.9 cubic feet) in the two-row SUV, but dramatically smaller (11.6 cubes) in the three-row version.

While the horizontal 14.5-inch touchscreen system features an abundance of technology, the learning curve can be frustrating at times. The clickable rotary wheel is annoying, and overall the system is not intuitive. We do like the tri-zone climate control and the 12-speaker premium audio system with HD Radio. The GV80 is also equipped with standard Apple CarPlay and Android Auto phone integration.

The 2021 Genesis GV80 is a likeable midsize luxury SUV that got thrust into Tiger Woods crash story and emerged with an enhanced reputation, thanks to its safety features. But it’s more than just a safe SUV. It also delivers good performance, a comfortable interior, and comes with an appealing sticker price.