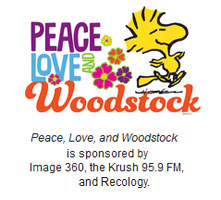 SANTA ROSA, Calif. – In honor of the 50th anniversary of the 1969 Woodstock festival this summer, the Charles M. Schulz Museum and Research Center presents a yearlong exhibition celebrating the smallest Peanuts character, Woodstock, named for the generation-defining music event. Opening March 17, 2019, and on view through March 8, 2020, Peace, Love, and Woodstock provides a rich snapshot of the landmark festival while tracing the evolution and life of Snoopy’s most trusted friend.

Though birds appeared early in Peanuts, it was not until 1967 when a distinct little bird began to appear more frequently in the comic strip, capturing hearts and inspiring laughs with his unique personality and eccentric ways. In a strip from June 22, 1970, his name was finally revealed.

“I had been reading the Life magazine article about the Woodstock festival and I had the little bird in the strip. I thought Woodstock would be a good name for this bird and also, it will get the attention of these people that liked that kind of thing.”

The September 1969 Life magazine that Schulz references is included in the exhibition alongside relics from the Woodstock event-the original program, poster, handbill, and tickets-and a historical overview of the event that drew an estimated 450,000 attendees to a dairy farm in upstate New York.

Though Schulz was not part of the counter-culture of the late-1960s, his daily cartoon strips embodied themes with which millions of readers could identify, including the power of love, an emerging anthem of the time.

“This theme is found perhaps in its most pure form in the character of Woodstock. Woodstock is loyal, deeply devoted, and always kind. He’s the best friend everyone wishes they had.”

Through original comic strips and interactive elements, Peace, Love, and Woodstock explores the trademark qualities that have made Woodstock the favorite feathered friend of Snoopy and generations of Peanuts fans alike. “Woodstock is like Snoopy in that he’s more than a simple bird. He’s opinionated, tenacious, and honest with his emotions,” said Clark. “Their friendship enables them to take on problems and go on adventures, both real and imagined, knowing that no matter the outcome, they have one another.”

Highlighted in the exhibition are Woodstock’s favorite haunts-from Snoopy’s fantastical doghouse to Woodstock’s one-of-a-kind birdbath-and a look at what type of bird he is, though this mystery remains open for visitors to solve themselves. A special exhibition-themed photo op allows visitors to don Woodstock disguises and step into the comic strip.

Additionally, a full roster of related public programs will unfold throughout the exhibition, including a Woodstock-themed trivia night on June 28, a conversation with Grateful Dead drummer Mickey Hart on August 3, and a “Summer of Woodstock” free admission day on August 25.

“Like the rest of Peanuts, Woodstock is inspired by Schulz’s life and the world at large,” said Clark. “The qualities that Woodstock exudes-kindness, love, goodwill-continue to inspire new generations and remain as relevant today as they were fifty years ago.”