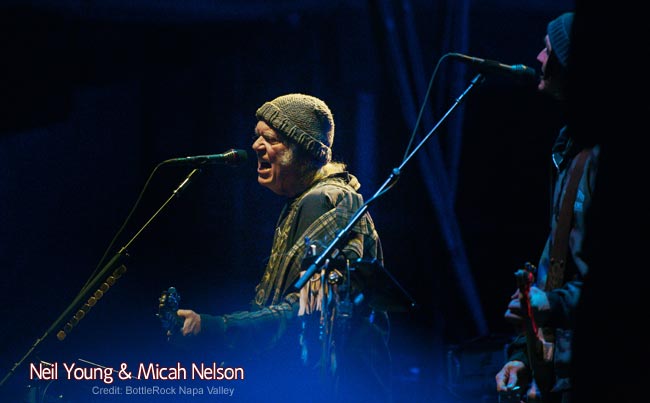 Colorful tapestry of generations at BottleRock

Napa, CA- “Keeps me searching for a heart of gold, and I’m getting old.” A poignant moment as thousands of voices of all ages sang along in unison to Neil Young’s 1972 chart-topping hit Heart of Gold.

A musical hand-off of sorts to the next generation of fans at BottleRock 2019 was on full display. Neil Young, backed by Promise of the Real, whose members are 40 years his junior, added some extra oomph to close out Saturday night in Napa. Neil, with fans spanning all ages and political stripes, has made a career of hurtling over the generational abyss and political divides through his music and songwriting. BottleRock, a festival for all ages was an ideal fit for this seemingly indefatigable 73 year-old musical icon.

Whatever your musical tastes, BottleRock deftly serves up an artful and considerate blend of both the old and new. It’s a winning recipe that help brings people of all ages together for a carefree weekend each May in Napa.

Perhaps the only downside to BottleRock is the seemingly endless options to experience over three days. Undeterred, several new discoveries only left us wanting for more. Here are just a few highlights from BottleRock 2019.

Tash Sultana
An energized and gifted one-woman band from down-under, this 23 year-old delivers a highly impressive and entertaining live show that must be seen to be appreciated. Tash is a multi-instrumentalist and singer who does it all.

Wilderado
Our first listen to this band who hails from Tulsa, Oklahoma. Our ears heard flavors reminiscent of Kings of Leon and Band of Horses. Easy on the ears, Wilderado is a band worth checking out.

Citizen Cope
After overhearing Citizen Cope covering Radiohead’s Karma Police, we decided to check them out. We’re glad we did. Delivering an old-school and chill vibe, they had the audience grooving the entire set. Alice Smith vocals added a warm and soulful element. Citizen Cope is currently on the road and a definite on our next tour list.

Bishop Briggs
Bursting onto the scene in 2015, this 26 year old indie-pop star held the rapt attention of BottleRock fans. She quickly rose to fame with her song River and TV appearance on The Tonight Show.

Mumford & Sons
Who knew folk rock was this popular…everyone, but us.
Thousands of fans streamed over to Jam Cellars Stage to dance their version of the Irish jig and English country dance. We really dug the rockin’ version of Tompkins Square Park and they closed it out with a nod to the past ripping into The Beatles 1967 classic, With a Little Help From My Friends. There’s no denying the popularity of Mumford & Sons.

BottleRock for All Ages

As BottleRock 2019 drew to a close this past Sunday night the younger generations of fans still energized, hustled toward the Jam Cellars Stage to dance away the night with Mumford & Sons.

Many older fans seemingly worn out from a weekend of indulgence meandered toward the exits. Voices gently began rising above the stream of those heading home and we could hear strains of “Keeps me searching for a heart of gold, and I’m getting old.”

See ya next year for BottleRock 2020!

Jam Cellars -For keeping the delicious Cabernet flowing!
Lagunitas – For quenching our thirst with Summer Ale.
Burger Patch – Sacramento’s, 100% plant based burger stop. Impressed.
Miyokos – Never imagined vegan cheese and better could be exceptional. We were wrong, it is exceptionally yummy and perfect for happy hour.

Now scheduling travel & destination coverage for 2023.
We go where we ♥, we love where we go!
Live light, travel light, spread the light.
Get in touch here