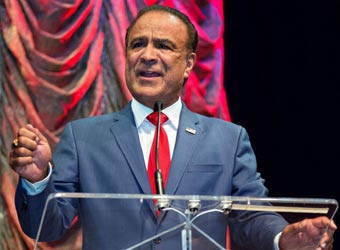 Anaheim, Calif.- Our city has emerged from the challenge of our time with economic recovery underway and a bright future ahead.

You wouldn’t know it from a recent report on California cities that ranked Anaheim alongside El Cerrito and Calexico.

The report, by the California State Auditor’s Office, generated headlines as intended. But it got it wrong.

No one takes fiscal health more seriously than I do. I welcome discussion of Anaheim’s budget, pensions and debt.

But I take issue with the report’s methodology and characterization of our city.

Anaheim is a full-service city with police and fire departments, water and power service and the largest convention center on the West Coast.

At its broadest measure, our yearly budget is $2 billion with our debts and obligations spread across what is California’s 10th largest city.

In a typical year, Anaheim sees more than 25 million visitors to our theme parks, convention center and sports and entertainment venues. Our economy is the envy of the cities called out by the auditor.

Like nearly all cities, we have pensions and debt. That should not surprise anyone. As a fiscally conservative city, we take on obligations knowing we can meet them.

After 2012 reforms, about 70 percent of our pension obligations are now funded. We are on track to fully fund pensions as earlier plans phase out and give way to new, more cost effective plans.

A large part of Anaheim’s debt stems from $510 million borrowed for the 1990s Anaheim Resort expansion.

There is good and bad debt. Our resort debt is clearly good. The return on investment has been a near quadrupling of city hotel revenue from $46 million in 1999 to $163 million in 2019.

Part of the Anaheim Resort debt was retired in 2019 with the potential to pay off the balance by the end of this decade, years ahead of schedule.

That stands to free up some $100 million annually for our general fund.

The report’s silence on Anaheim’s handling of the pandemic crisis is telling. Few cities could have withstood what Anaheim did and come out standing.

After years of growth and balanced budgets, we faced a $100 million general fund deficit. The pandemic hit Anaheim about as hard as any city. That is not mismanagement, just bad luck.

Still, we came through it intact with a balanced budget and ongoing investment in parks, libraries, roads and utilities.

Anaheim passed this epic stress test by continuing to meet our obligations and with no “crowding out” of services to our community.

But we faced an impossible choice – borrow or cut to the bone. The alternative? Delayed public safety response times, closed libraries and decimated services for the neediest in our community, including those living in homelessness.

Our ability to raise money in a time of need speaks to our fiscal strength. Our investment grade credit ratings on Wall Street allowed us to issue bonds at a favorable rate and made borrowing not only fiscally responsible but also smart.

Our bond offering was well received and stands in stark contrast to the sensational picture painted by the state auditor.

We took on this new obligation knowing what the state auditor does not – Anaheim is attracting billions in investment that will create new revenue for our city for years to come.

Reports will come and go. But Anaheim’s track record and outlook speak for themselves.