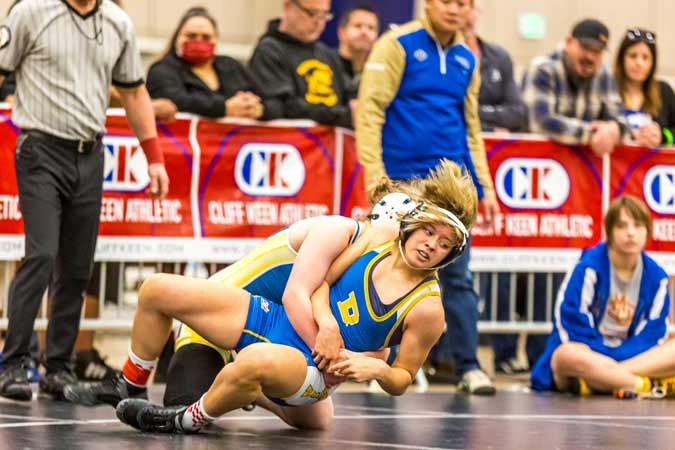 The two-day tournament – one of the largest in the nation – starts about 11:30 a.m. Friday and 8:30 a.m. Saturday in the Roebbelen Center located on the @the Grounds campus, 700 Event Center Drive in Roseville.

The Cliff Keen-sponsored West Coast Tournament of Champions allows women wrestlers to compete before the holiday break, some area businesses to enjoy a boost in revenue – and fans attending to experience the fastest-growing women’s sport in the nation.

“It’s just amazing how much the sport has grown in just a few years,” said tournament director Don Martinez, head coach of the Sierra College men’s wrestling team. “It seems like there is a new women’s wrestling program that starts every week.”

Fewer than 1,000 girls competed in high school wrestling in 1994, but participation has soared to almost 32,000 in 2022, according to the National Wrestling Coaches Association. And more than 100 colleges have women’s wrestling teams, with more college athletes competing in the sport than crew (rowing), fencing, rugby, sand volleyball or skiing.

Martinez estimates more than 1,000 of those wrestlers are in California, including many in the Sacramento region.

More than 100 high schools – including about 70% of Sacramento-area schools with girls’ wrestling teams, from Del Oro and Granite Bay to Rocklin and Roseville high schools – will compete in the West Coast Tournament of Champions. High school teams from Texas and as far away as Minnesota are also making the trip to the tournament. And another 150 middle school girls are expected to participate.

The wrestlers will be battling for awards – and attention from the colleges.

“We bring the colleges to them,” Martinez said of the tournament. “It’s a great place to be seen.”

West Coast power and national champion Menlo College in the Bay Area and 17 other colleges, including Simpson College and Vanguard University, will compete in the high-profile tournament. Colleges from Michigan and Nebraska are also participating. A few junior colleges will also bring teams.

“You will see some of the best wrestlers in the nation,” Martinez said.

Placer Valley Tourism established the West Coast Tournament of Champions in 2016, partnering with Martinez to oversee the wrestling side of the event. The goal was to attract high schools and later colleges before the holiday break – and help fill hotel rooms in the region during what is often a slower period for the tourism industry.

“It was a great fit for everyone, from schools and wrestlers hoping for a holiday season tournament to hotel operators looking for more guests,” said Kim Summers, CEO of Placer Valley Tourism and @the Grounds. “It gets better and bigger every year, and helps generate more revenue for businesses, from restaurants to stores.”

The fast-expanding tournament was first held at the Hardwood Palace in Rocklin, and moved to the much-larger Roebbelen Center in 2021. The massive Roebbelen Center – able to accommodate 12 full-length basketball courts or 24 volleyball courts – will have 14 wrestling mats for the tournament.

“You will be amazed at how far women’s wrestling has come,” Martinez said.