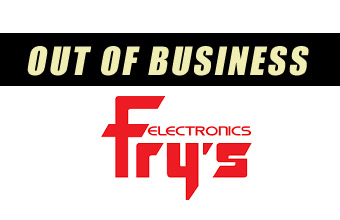 Roseville, CA- During it’s peak, Fry’s Electronics was a consumer epicenter of the Silicon Valley computer and Internet age. Today, Fry’s Electronics at 180 Sunrise Ave. in Roseville along with all their stores nationwide have gone out of business. The other local location affected is at 4100 Northgate Blvd in Sacramento.

The Roseville location had become somewhat of a ghost town over an extended period with empty shelves, limited supplies and fewer customers. For some time it appeared to be a matter of when, not if they would close.

A destination during its peak

Sporting unique funky themes in behemoth electronic warehouses, shoppers could spend hours wandering the aisles for all manner of electronic devices for home and office. For many, a trip to Fry’s became a destination for those in search of the latest tech innovations to the fearless DIY crowd. Long before home monitoring and automation became mainstream, Fry’s supported the niche, along with countless others. Fry’s was also noted for it’s less than friendly return process.

Ironically, technology which brought Fry’s its tremendous success, ultimately delivered its fatal blows. Extremely slow to adapt and compete online, competitors poured onto the Internet with dramatically better solutions for modern consumers. In an effort to protect their enormous brick and mortar investments, they never mustered more than a feeble online customer experience.

Fry’s Electronics, an expansive, unique and fun adventure during it’s heyday, is no more.

“After nearly 36 years in business as the one-stop-shop and online resource for high-tech professionals across nine states and 31 stores, Fry’s Electronics, Inc. (“Fry’s” or “Company”), has made the difficult decision to shut down its operations and close its business permanently as a result of changes in the retail industry and the challenges posed by the Covid-19 pandemic. The Company will implement the shut down through an orderly wind down process that it believes will be in the best interests of the Company, its creditors, and other stakeholders.”

“The Company ceased regular operations and began the wind-down process on February 24, 2021. It is hoped that undertaking the wind-down through this orderly process will reduce costs, avoid additional liabilities, minimize the impact on our customers, vendors, landlords and associates, and maximize the value of the Company’s assets for its creditors and other stakeholders.”

“The Company is in the process of reaching out to its customers with repairs and consignment vendors to help them understand what this will mean for them and the proposed next steps.”