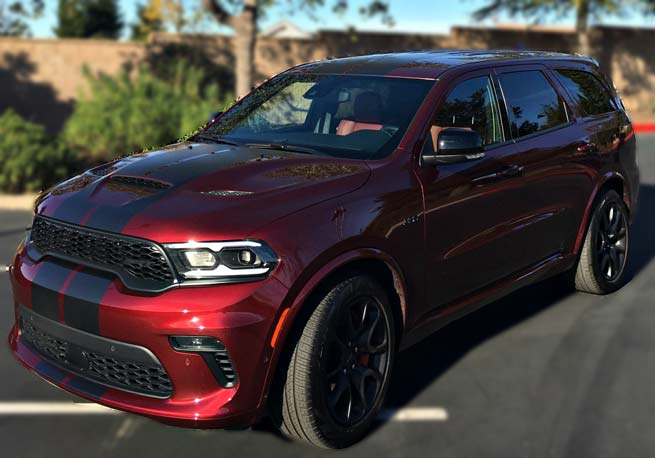 Roseville, Calif.- There’s nothing flashy regarding the 2022 Dodge Durango. It remains an SUV with a nod to the past.

The latest version of the three-row Durango remains a workhorse that looks burly and sounds the part as well. It’s practically unrivaled in the midsize SUV class, thanks to its towing and hauling ability.

The Durango is offered with three engine choices, two of them V8s. Durango’s best attribute is its power. It’s a more traditional SUV that lacks major sophistication and doesn’t list fuel economy as one of its attributes.

Rivals like the Kia Telluride, Honda Pilot and Toyota Highlander all provide more refinement and better gas mileage. Depending on the engine, the Durango gets between 13-26 mpg.

There’s nothing dramatically new with this year’s Durango. The third-row seating that can handle up to seven passengers is now standard and there are more safety features in 2022. The biggest news is the power-laden 710-horsepower Hellcat model has been discontinued.

The base model Durango has a 3.6-liter, V6 engine that generates 295 horsepower and 260 pound-feet of torque. It’s paired with an eight-speed automatic transmission and goes 0-60 mph in 7.5 seconds. It’s the best of the three in fuel economy (19-26 mpg).

In regards to performance, the star of the group is the SRT model with a 6.4-liter, V8 engine that gives off 475 horsepower and 470 pound-feet of torque. It comes standard with all-wheel drive and has been clocked going 0-60 mph in very swift 4.9 seconds.

Driving the Durango feels cumbersome; the turning radius is bulky and requires attention to detail when maneuvering, especially in tight parking lots.

Seating is good overall in the Durango. The front seats are supportive and both rows provide solid leg and head room. Like most third rows, the Durango is most suitable for small kids. However, two adults can find a degree of comfort back there.

Cargo area is a plus, offering 17.2 cubic feet of space behind its third row. It grows to 43.3 cubes with the second row folded, and increases to 85.1 cubic feet with the two back rows down.

There’s nothing fancy regarding the 2022 Dodge Durango. It could probably use an interior remodeling and a flashier exterior, but it obviously still has enough appeal to generate solid sales figures.