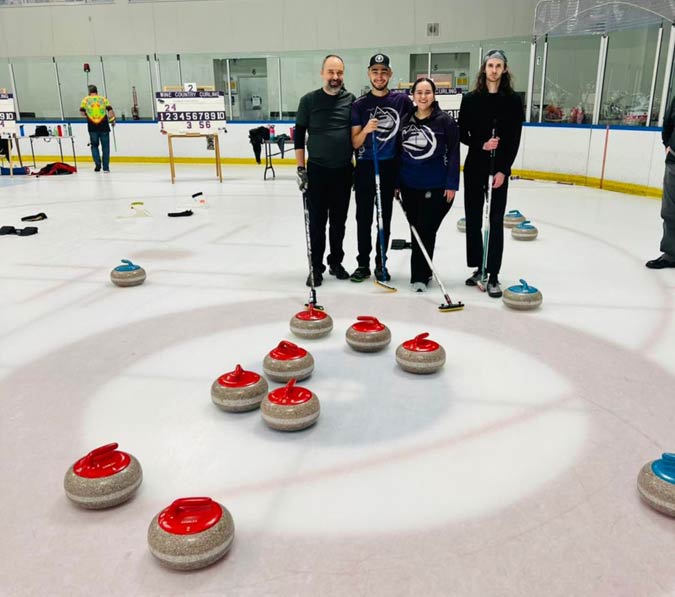 Roseville, Calif.- Guess what happened at the Crush Bonspiel this past weekend?!?!?! One of our competing teams scored an 8-ender! An 8-ender in curling is just like a perfect game in baseball or a hole-in-one in golf or a perfect 300 in bowling or a 9-dart finish in darts! It’s a feat so rare the odds of scoring one is nearly impossible to know.

Curling is one of the fastest growing sports in the United States and our club, the Wine Country Curling Club, is dedicated to promoting the sport in Northern California. We host learn-to-curls and leagues on Tuesday nights and Sunday mornings at Skatetown Ice in Roseville.

We also host a curling tournament over the Labor Day Weekend. This year we brought in 32 teams from 18 clubs from around the country and from 2 provinces in Canada.

During the second draw of the Crush Bonspiel on Friday, Team McDonald scored the 8-ender!!! An 8-ender occurs when a team scores 8 points in a single end of curling.

To indicate just how special this is, Team McDonald will now be listed in the American Curling Foundation & Museum. Eight-enders are so rare that USA Curling recognizes all teams that accomplish this feat with an eight-ender patch.

This is also the 2nd time in our club’s 15-year history to unlock this achievement.

Junior Feldman and Brian Feldman are father-and-son on the same team for this event. Also, Andie, Junior, and Ozzie are junior curlers (under 21).

There has never been an 8-ender in Olympic competition. There was a 7-ender in 2014 which is as close as you can get.