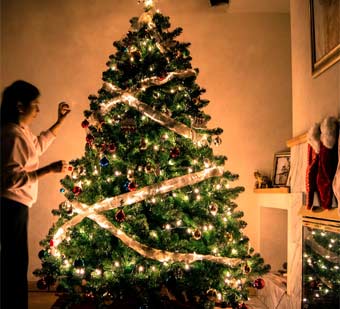 A variety of factors can lead to the holiday blues, but it’s also important to know when symptoms are a sign of major depression or anxiety.

Although the holidays are a time of joy for many, they can also trigger symptoms of anxiety and depression to different degrees.

There are several reasons people may experience symptoms of anxiety or depression over the holidays, said Peter Yellowlees, Chief Wellness Officer and a professor in the Department of Psychiatry and Behavioral Sciences at UC Davis Health. Symptoms may indicate the “holiday blues” or be signs of a more serious major depression.

Common causes of the holiday blues

The holiday blues may plague more people this year as concerns about climate change and political differences abound. Common causes include:

With the change in time, as many as a third of people who have experienced a major depressive disorder will experience worsening of their symptoms during the winter months, Hales said. In addition, people without full-fledged depressive disorders often report some decreased energy, sadness, decrease in interest or pleasure in activities, and sleep disturbance. Getting out in the morning light and spending time outside can be quite beneficial.

It is common during the holiday period for people to celebrate. Unfortunately, a certain percentage may drink too much. Alcoholism is also a disorder that commonly occurs with depression. Limit your drinking and remember that it is okay if you don’t feel festive. Accept your inner experience and do not force yourself to express specific feelings.

Obesity is a major American problem. During the holidays, there is a tendency for all of us to eat too much, which can lead us to feel worse about our body image and ourselves.

Excessive Online and TV Use

Spending too much time online or passively watching TV- Social networks are a fun way to keep in touch with family and socialize, but Yellowlees recommends taking the time to interact in person or by phone.

Too Much Free Time

Depression can cause some people to think and focus on themselves or on major world problems. Yellowlees recommends taking steps, even small ones initially, to become more active and pick up a hobby.

It is not uncommon for people to spend more time celebrating, meeting people and going out. Unfortunately, decreased sleep is a major contributor to feeling tired and lethargic during the day, and may contribute to increased rates of depressive symptoms. It is important during the holiday period to try to develop healthier sleep habits.

There is sometimes a desire to meet with as many people as possible that we have not been able to see during the year. This results in a packed schedule. Frequently, we will feel rushed and burdened by the need to interact with so many over such a short period. Don’t overbook yourself. Try to limit the number of interactions and think carefully about who you wish to meet.

It is not uncommon to see people running around malls at the last minute because they delayed purchasing gifts. This adds a great deal of stress and contributes to holiday blues.

Unrealistic expectations about ourselves

During the holidays, we frequently meet other people that are quite successful and are advancing throughout their careers. This may lead us to place unrealistic expectations on ourselves concerning our own accomplishments, or our perceived lack of them. None of us is perfect, and sometimes we develop unrealistic expectations over the holidays of what we should accomplish and focus our failures. Be realistic in what you seek to achieve, both personally and professionally. Don’t label the holidays as a time to cure all past problems. The holidays do not prevent sadness or loneliness.

Unrealistic fantasies about our families

Frequently during the holiday season, we will see movies that picture “the wonderful life,” exemplified by “perfect” families, Hales said. Unrealistic expectations that one’s own family should meet these high standards can be quite depressing. Try to be realistic and emphasize your family’s strengths rather than weaknesses.

Because of frequent rain, people often exercise less during the holidays. Exercise is a known preventive activity for depressive symptoms, and decreasing the amount of a regular exercise can worsen symptoms.

Lack of time for oneself

A major focus of the holidays is providing things for other people or looking after them. We frequently neglect ourselves during this time. This externalization of efforts can deplete your reserves and worsen symptoms of anxiety or depression. Practice self-care and look out for yourself during the holiday period. The holidays are a wonderful period to reflect, reassess and make plans for the future.

Tell people about your needs if you have recently experienced a tragedy, death, or romantic break-up.

Comparing the holiday blues to a depressive disorder is like comparing a cold to pneumonia, Yellowlees said. Major depression can destroy joy for living and make it impossible to focus on work and responsibilities. Individuals may experience hopelessness and depressive symptoms such as sadness and tearfulness throughout the day. Thoughts of death or suicide may enter their minds.

Depression is the world’s most common mental ailment, affecting approximately 16 percent of adults at some point in their lives. Stress-related events such as the holidays may trigger half of all depressive episodes, Hales said.

There are various forms of anxiety. About 10 million adults in the U.S. suffer from a generalized anxiety disorder, which is an excessive or unrealistic apprehension that causes physical symptoms and last for six months or longer.