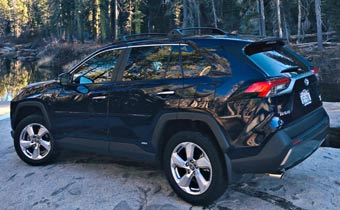 Considered among the elite in Compact SUV field

Roseville, Calif. – It’s one of the biggest sport utility vehicles in the compact class. And every time we drive one, we swear it looks more like a midsize SUV.

Make no mistake, the Toyota RAV4 is considered among the elite “big guys” in the compact SUV field. It’s been jockeying for supremacy with the Honda CR-V for more than two decades. And judging by sales the past four years, the RAV4 is currently on top.

That rivalry includes the hybrid versions, which are both top-notch. We sampled the 2021 Toyota RAV4 hybrid and came away quite impressed. It cost a bit more than the standard gas-powered RAV4, but the money can be recouped due to the hybrid’s terrific gas mileage (38-41 mpg). And the Toyota hybrid is cheaper than the CR-V.

The emergence of the hybrid version has no doubt helped improve RAV4’s overall sales. It’s the top-seller in the class, exceeding 400,000 the past four years that includes an all-time best of 448,958 in 2019.

RAV4 sales have exceeded CR-V in those four years. The Toyota SUV has also remained ahead of two other notable small hybrid SUVs – the Ford Escape and up-and-coming Hyundai Tucson.

Aside from the enviable fuel economy, this year’s RAV4 hybrid also has a roomy interior, has a large cargo area and provides solid performance. It’s part of the fifth RAV4 generation that was introduced in 2019.

Designed as a small SUV that appealed primarily to women back in its 1996 debut, the RAV4 exterior has grown tougher over the years, no doubt a change that helped make it popular with men as well.

The RAV4 hybrid comes equipped with two electric motors that combine with a 2.5-liter, four-cylinder to produce 219 horsepower and 176 pound-feet of torque. The hybrid has standard all-wheel drive and goes 0-60 mph in 7.4 seconds.

Quicker than the gas-powered RAV4, the hybrid weighs 3,710 pounds and tows up to 3,500 pounds. Although not meant for off-roading, it will definitely provide good traction on snowy and icy roads.

One area of complaint with any version of the RAV4 is the ride quality. It doesn’t absorb the bumps well on uneven surfaces and the engine noise is noticeable at high speeds, often requiring a hike in the radio volume.

However, the RAV4 delivers better results in terms of handling and maneuverability. Still, some of its rivals are superior in both areas.

Technology is another category where the RAV4 could use some improvement. Although we appreciate some of the simplicity in mastering the controls, more tech-savvy folks may demand more.

The RAV4 comes standard with a 7-inch touchscreen display that has a sizable tablet style, but it gets dinged for its dated graphics and the long reach that is required of the driver.

The seating is solid in the roomy cabin that offers lots of room for four adults (three in the back row can feel a bit cramped). We don’t like that the passenger front seat lacks the easy adjustments that the driver receives.

The cargo area is a true strength, measuring 37.6 cubic feet behind the second row and expanding to 69.8 cubes with the seats folded down. Note that the Honda CR-V is just a tad bigger.

Even though there remains room for improvement, the 2021 Toyota RAV4 hybrid has got to reside on the must-see list for anyone considering a purchase of a compact SUV.