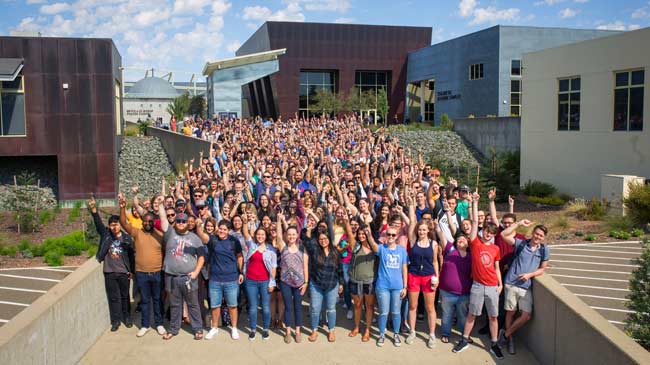 “Jessup continues to be a highly ranked college and a premier destination for private higher education in Northern California,” said Steve Jin, Jessup’s Associate Vice President for Enrollment Management. “We continue to experience growth, particularly in our graduate programs.”

Approximately 1,745 students are attending the Sacramento region’s only WASC-accredited, private four-year Christian Liberal Arts University. Of those, over 500 are new students between undergraduate and graduate programs.

Founded in 1939, Jessup is celebrating its’ 80th anniversary this year and honoring its 15th year in Rocklin. The growing university was established in San Jose, Calif., and known as San Jose Bible College when it opened its doors with just 14 students on September 20 that year.

In 1989, the name was changed to San Jose Christian College and later became William Jessup in 2004, when the university relocated to Rocklin and broadened academic programs in a variety of disciplines. William Jessup University welcomed 436 students in the fall of 2004. Since then, the university has experienced nearly a 300 percent increase in students.

Jessup has continued to enlarge and develop facilities as well as academic and athletic programs. As the university continues to expand its reach, incoming students are represented from across the United States and internationally. Students from China, Hong Kong, India, Spain, Ethiopia and Bulgaria now call Jessup’s Rocklin and San Jose campuses home.

Jessup’s expanding athletics program is recruiting for its newest sport of STUNT, which combines technical and athletic components of cheer to compete in the Golden State Athletic Conference beginning in 2021. A new women’s golf program begins in September. This academic year, over 300 student-athletes are on campus. Currently, the Warriors sponsor 14 conference sports, including men and women sports in cross-country, soccer, basketball, golf, track and field, as well as men’s baseball and women’s softball, tennis and volleyball.

Jessup students are not only encouraged to grow spiritually, they are challenged academically and become exceptionally employable. According to a university survey, within six months of graduating, 95 percent had obtained full- or part-time employment or were enrolled in graduate school.