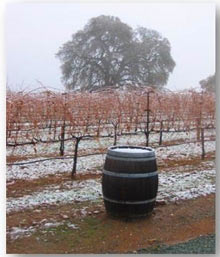 Camino, El Dorado County – The harvest of 2020 was complete last week in El Dorado wine region vineyards and a sure sign was a slight dusting of snow. “Snow,” a rare entry in the lexicon of California grape growing, is a positive development for farmers and winemakers in the mountain vineyards of El Dorado AVA.

The region, compared to many other wine regions in California, was unscathed by disaster in 2020 – no smoke taint or wildfires and moderate temperatures for most of the pick. Very warm temperatures, some days over 100 degrees, in October and into November however did threatened vintners that vines would force new budding. Paul Bush, winemaker owner of Madrona Vineyards and Rucksack Cellars claims that this was the earliest he has seen snow in the Camino district of the region but remarked, “It is exactly what our vineyards needed to push vineyards towards dormancy.”

Nolan Jones of Lava Cap winery says “Knowing there was a strong chance of rain, we harvested the last of our Estate Cabernet Sauvignon last week.” Both Bush and the Jones family, owners of Lava Cap Winery, agree the snow is beneficial. Jones adds, “The rain and cold weather are great to get our cover crops growing. Since all of our vineyards are situated on slopes, we do not till in between our rows during the summer. Instead we seed cover crops in the fall and leave the grasses to prevent erosion during the winter and spring months. “

Jones adds, “Particularly important when we are in years of drought and heat, the permanent presence of grass also prevents soil compaction due to tractor activity, allowing for greater soil water permeability and healthier vine root structure.”

From the view inside El Dorado cellars, cooler temperatures may make malolactic fermentations slow down a bit. Bush says, “Luckily most of the wines are already through malo, so the chance few, like our Nebbiolo that aren’t through malacotic, will be moved to a warming room.”

At Lava Cap, Jones explains, “Grapes came in cold, and as a result went through an extended cold soak, only now reaching peak fermentation.”

No snow is predicted in the next week in El Dorado but it will remain cooler with a chance of rain this weekend. Typically, the region’s vineyards are blanketed in snow off and on through the winter months.