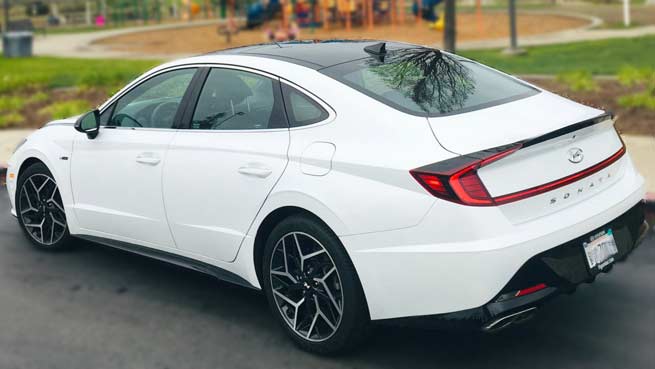 Roseville, CA- A new redesign was supposed to boast sales for the 2020 Hyundai Sonata. However, the revamped Sonata apparently wasn’t alluring enough as sales dropped once again.

Now in its seventh generation, the 2021 Hyundai Sonata arrives with lots of improvements due to last year’s redesign. Among the upgrades were new technology features and a larger interior. The exterior styling, including a new grille, gave the Sonata a sportier look because its lower and longer.

Hyundai hopes to bump those numbers up by adding the Sonata N Line this year. The performance-laden, sportier N Line is geared toward buyers who want a family-friendly sedan with an edge. Tested here for a week, the N Line has an upgraded engine, a turbocharged 2.5-liter, four-cylinder that generates 290 horsepower and 311 pound-feet of torque.

The N Line goes 0-60 mph in an impressive 5.3 seconds, and has some auto reviewers claiming it’s the quickest front-wheel drive family car they’ve ever tested.

Performance is mediocre for the remaining Sonata models. The standard engine is a 2.5-liter, four-cylinder that generates 191 horsepower and 181 pound-feet of torque. Another turbo model is a 1.6-liter, four-cylinder with 180 horsepower and 195 pound-feet of torque. It goes 0-60 mph in a sluggish 8.2 seconds. The upside is both these engines deliver good fuel economy.

Even before the redesign, the Sonata enjoyed a reputation for providing a well-designed cabin that uses quality materials. The comfortable seating is another Sonata trait. Up front, the leg and head room are good, while in the back seat passengers can sit comfortably, even behind a driver who is 6-foot tall or more.

Other than an odd push-button shifter, nearly all the control features are smartly placed, intuitive, and fairly easy to quickly master. There’s a standard 8-inch touchscreen and Android Auto and Apple CarPlay comes with every trim model (SE, SEL, SEL Plus, Limited, N Line). Trunk space is average for the class at 16 cubic feet.

Introduced a year ago, the new tech feature was a digital key, an app that allows the driver to use their cell phone as a key. A drawback is the digital key is not compatible with iPhones – it’s Android friendly only.

There’s nothing that sticks out regarding how the Sonata drives, most of its traits – handling, steering, braking – are just average. A nice tech feature is the remote parking assist, allowing the driver to be outside the car and direct it to move forward or backward using the key fob. Note that the process is a bit tedious.

A redesign last year and the addition of the N drive this year makes the 2021 Hyundai Sonata more appealing overall. We’re fans of its interior makeup and it remains solid overall in a midsize sedan class that’s loaded with good choices, yet suffers from declining sales.