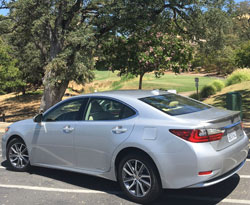 Roseville, CA- This is a luxury hybrid sedan that can really max out the distance for one tank of gas.

Being capable of going approximately 690 miles before another fill-up is one primary reason to love the 2018 Lexus ES 300h. There aren’t many vehicles that can go seemingly forever on a tank of gas. The 300h has two advantages: It has an enormous gas tank (17.2 gallons) and the hybrid gets an estimated 39-40 mpg.

So, we’ve established that the ES 300h has at least one fabulous quality. Yet it also has several other worthy characteristics – most notably cost. The ES 300h has a starting price of around $42,000, not that much more than the related Toyota Avalon hybrid. Lexus is Toyota’s luxury brand and there’s no arguing that the 300h has luxurious qualities that the Avalon hybrid can’t match.

Car shoppers can also take note that the ES 300h has a finely designed interior with lots of room, has considerable standard features, and provides a soft and comfortable ride.
For knowledgeable Lexus ES folks, an exterior change arrived several years when the design team gave the ES models some sharp features. Part of the styling was borrowed from Lexus’ signature hourglass-shaped grille, which the Japanese automaker likes to refer to as a “spindle.”

Other than a few tweaks, the standard ES 350 and its hybrid counterpart have not received many changes the past two years. Note that both the ES 350 and the ES 300h come in one trim model only. You either like them or you don’t.

The ES 300h features a 2.4-liter, four-cylinder engine that pairs with an electric motor for a combined 200 horsepower. It receives criticism for a lack of performance, since it only accelerates from 0-60 mph in 7.8 seconds.

No one who test drives either ES models will confuse them with the sportier BMW 5 series. But a relatively new suspension and some steering changes have improved the way the ES handles overall. The braking remains good and even at high speeds the ES provides a quiet ride.

The ES models used to have a simplified cockpit, but now they are far more sophisticated. Not surprisingly, the downsize is there is a more difficult learning curve with the controls. Many people are not fans of the Remote Touch electronic interface because it’s too much of a distraction while driving.

The ES 300h interior features leather and soft materials that make for a very appealing combination. Due to the battery, the trunk space is 12.1 cubic feet in the hybrid, roughly three feet less than the ES 350. Another negative with the 300h is the back seat doesn’t fold down to provide additional room.

Although the 2018 Lexus ES 300h has some downside, it should easily satisfy shoppers who want a highly fuel-efficient, roomy luxury sedan.