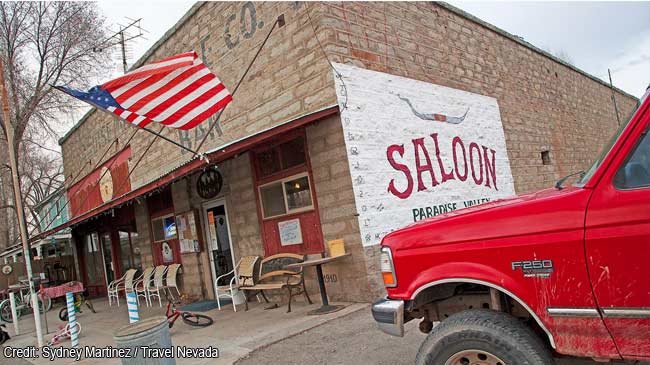 Reno, Nevada- There’s much more to Nevada than meets the eye. For the uninitiated, Nevada surprises visitors with a remarkable array of contrast and wild sense of adventure. Perhaps, there’s no better way to explore the rich tapestry of this quirky and at times, unbridled western treasure than with a great American road trip. Here we go!

Leg #1: Presenting Nevada’s Past – From Reno to Winnemucca

You’ll start your road trip in Reno, Nevada’s second-largest metropolitan area! However, despite being one of the western U.S’s increasingly hippest, artsiest cities-not to mention the modern gold rush here for tech companies like Tesla and Apple-Reno’s Wild West legacy still lives on though events such as the annual Reno Rodeo in June (with 2019 marking its 100th anniversary) as well as with hearty, traditional Basque cuisine at Louis’ Basque Corner restaurant available for indulgence all year long.

From there, it’s off to Fernley, where stunning views of the picturesque Truckee River Canyon meandering below Interstate 80 Nevada are offered. Check out its collection of American Indian artifacts. Keep your eyes peeled for the Main Street Art Park, a sculpture garden that houses some of the artwork from the annual Burning Man gathering, which takes place just north of Fernley in the Black Rock Desert. (Intrigued? Road trip the Burner Byway for a different kind of culture kick.)

Continue east about an hour to reach Lovelock, once a stop for pioneers traveling to California for the Gold Rush of 1848. The section of Interstate 80 from Elko to Lovelock roughly follows the path of the Humboldt River, the longest river in the state. You’ll see Lovelock Cave, an ancient Shoshone shelter that housed nearly 10,000 artifacts, including the world’s oldest tule duck decoys (c. 400 BC)-named Nevada’s Official State Artifact. Lovelock is anchored by Lovers Lock Plaza, where couples help Lovelock live up to its name by “locking their love” to a never-ending chain, symbolizing (you guessed it) eternal love. Standing here, you can’t miss the nation’s last circular courthouse, designed by locally renowned architect, Frederic DeLongchamps. Also in town: check out the Cowpoke Café for a tasty bite to eat and Nanny Jo’s for some amazing antique shopping.

Drive about 40 miles down Interstate 80 and you’ll stumble upon a delightfully offbeat roadside attraction called Thunder Mountain, a colorful, imaginative folk-art array of sculptures and buildings constructed almost entirely from items found along the highway decades ago. Watch for the Imlay exit, then follow your camera lens around this special addition to the Nevada State Register of Historic Places.

You’ll then head to Winnemucca is one of the state’s oldest settlements due to its location near the Humboldt River. The town is home to the artifact-packed Humboldt Museum, as well as the Buckaroo Hall of Fame & Heritage Museum. Equal parts museum and shrine, the latter honors the Great Basin’s “Legendary Buckaroos”. Grab a steak at Ormachea’s (now called Bakarra Basque Bistro), or opt for another full-on Basque family dinner at The Martin Hotel.

From Winnemucca, opt for a short detour to the Unionville ghost town, a 19th-century mining community where author Mark Twain once tried mining. It is just a half hour south of Interstate 80 on Nevada state Route 400. Keep an eye out for Mark Twain’s original cabin!

**Staying over in Winnemucca? We recommend the Candlewood Suites Winnemucca or Scott Shady Court.

Driving over to Winnemucca will first take you to the Battle Mountain, a community situated neither near a mountain nor the site of a battle. However, that’s not to say the town is totally explosion-free. What you will find: Roller Coaster Fireworks Outlet, where admitted pyro Steven (also known as ‘Spider’) Cassorla offers expert advice on fireworks and where they can be discharged-legally. Here, you can count on walking in a customer and leaving as a friend.

After experiencing Winnemucca, you’ll make your way to Elko, where cattle ranches and other legacies of the region’s cowboy and ranching past remain strong. Head to the newly opened Cowboy Arts and Gear Museum, where you can learn the Garcia Bit & Spur story, as well as appreciate the kind of top-notch handiwork that’s been sought by working cowboys, Hollywood stars, and collectors for over a century. As you explore this quintessential western town, be sure to stop by the Northeastern Nevada Museum (arguably the centerpiece of your Cowboy Corridor road trip) to discover the area’s local and natural history, as well as collections by famed photographer Ansel Adams and Western artist and author Will James. (Fun fact: Elko is also home to the country’s National Cowboy Poetry Competition every year!)

You would be remiss to pass up an opportunity to experience authentic Basque culture in Elko. Thanks to 19th-century Basque immigrants from Spain and France, Elko is still a major stomping ground for Basque culture and traditions. You can find plenty of them at the National Basque Festival in the form of music, dancing and woodchopping competition. And of course, you have to taste some delicious, authentic Basque food. Try The Star Hotel, a former sheepherders’ boarding house that still looks the part. Or head up the street at Toki Ona, home to one of Nevada’s best Basque steak sandwiches.

You can take in the beauty of the nearby Ruby Mountains, commonly known as the “Alps of Nevada”, by driving the Lamoille Canyon Scenic Byway into a glacier-carved canyon known for its beautiful fall foliage and spring waterfalls. Boasting alluring recreational opportunities like hiking, fishing, and even heli-skiing, many visitors opt to turn their exploration of this exquisite mountain range into its own adventure by tacking on The Rubies Route to their road trip.

**Spending the night in Elko? We recommend the Red Lion Hotel & Casino or the Thunderbird Motel.

Leg #3: The Boulevard of Blues, Brews and Ruby Peaked Views – From Elko to West Wendover

As you leave Elko, top at the city of Wells and grab a bite to eat at Bella’s Restaurant and Espresso. Keep your eyes peeled for mule deer and mountain goats as you fish or explore the trails around Angel Lake, an alpine lake in the East Humboldt Range and an extension of the Ruby Mountains.

The last leg of the trip will take you to the town of West Wendover. The town flows seamlessly into neighboring Wendover, Utah – in fact, the locals of West Wendover observe Mountain Standard Time. West Wendover is home to the Historic Wendover Airfield, a repository of World War II Army Air Force history. There’s also Blue Lake, a hot springs-fed lake that is popular with scuba divers, about 30 minutes from West Wendover. As you drive through down, you’ll also come upon the Bonneville Salt Flats (formed when ancient Lake Bonneville dried up), home to the Bonneville Speedway, where numerous land speed records have been set during Bonneville Speed Week. To add some real thrill to your trip, plan your travels around this six-day event!

Don’t forget to take a photo with the beloved Wendover Will on Wendover Boulevard – a 63-foot tall neon sign that got his start in 1952. You simply can’t miss him! After you meet Wendover Will, venture over to the Goshute Mountains, where Hawkwatch International operates a migration monitoring station to study raptors as they migrate through the Intermountain Flyway. 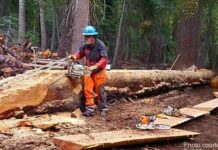 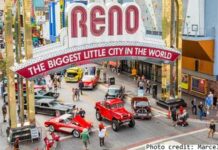 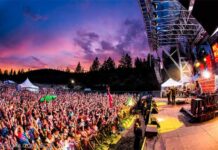 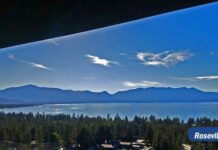